Juventus missed a chance to extend their advantage over second-placed AS Roma when they played out a dismal 0-0 draw away to Udinese on Sunday, while Napoli closed in on Serie A's top two with a 2-1 win at Chievo. Inter Milan's miserable form under Roberto Mancini continued as they lost 3-1 at Sassuolo, however neighbours AC Milan won for the first time since the Christmas break when they beat bottom-of-the-table Parma by the same score.

Frenchman Jeremy Menez scored twice for Milan, the first a penalty, to take his tally to 12 league goals this season and lift his team to joint eighth alongside Genoa with 29 points.

Juventus, with 50 points from 21 games, stayed seven clear of Roma although Carlos Tevez should have given them the points when he shot wide after being set up by Paul Pogba.

Roberto Pereyra also hit the woodwork for the champions.

Napoli's 2-1 win at Chievo, thanks to Manolo Gabbiadini's second-half winner, took them to 39 points, four behind Roma who drew 1-1 with Empoli on Saturday.

Atalanta's Pinilla has now scored for 10 different clubs after his incredible acrobatic effort in the fourth minute of stoppage time.

The ball was played into the penalty area behind the Chilean but he still managed to hook it over his shoulder into the net, stopping Cagliari's revival under Gianfranco Zola in its tracks.

The Sardinians are just one point above the relegation zone.

Quagliarella volleyed Torino ahead from a corner and converted a penalty on the half hour as Torino ripped into high-flying Sampdoria, then completed his hat-trick just after the hour by turning in Marco Benassi's pass.

Samuel Eto'o came on for his Sampdoria debut only to see Amauri and Bruno Peres add two more for Torino while Pedro Obiang grabbed the visitors' consolation.

"Today, I'm ashamed, we started the game badly and we were even worse at the end," said Mihajlovic.

Fourth place Lazio stayed level on 34 points with Sampdoria after a shock 2-1 defeat at relegation-threatened Cesena.

Inter, who beat Sassuolo 7-0 in the same fixture last season, have taken only 10 points in 10 games under Mancini and dropped to 13th with 26 points.

Image: Ivan Piris (right) of Udinese Calcio challenges Carlos Tevez of Juventus FC during their Serie A match at Stadio Friuli in Udine on Sunday

© Copyright 2021 Reuters Limited. All rights reserved. Republication or redistribution of Reuters content, including by framing or similar means, is expressly prohibited without the prior written consent of Reuters. Reuters shall not be liable for any errors or delays in the content, or for any actions taken in reliance thereon.
Related News: Sampdoria, Napoli, Torino, AS Roma, Atalanta
COMMENT
Print this article Tevez does not intend to extend Juventus contract 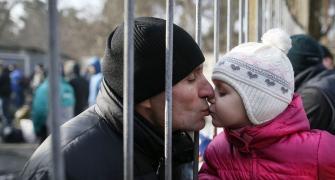 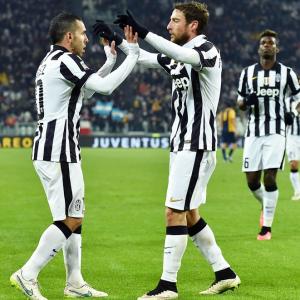