Samuel Eto'o scored another cracking goal to give Inter Milan a 1-0 win at Cagliari on Sunday and hit back at the racist chanters who had earlier held up the game.

The victory sent champions Inter level on points at the top with AC Milan, who beat Chievo on Saturday.

Cameroon forward Eto'o took his Serie A tally to six goals from seven games this term and like most of his recent efforts, the 39th minute goal was a marvellous strike.

Wesley Sneijder hooked on and Eto'o twisted and turned like Inter's serpent symbol on their new away kit before planting a left-foot shot in the corner from the edge of the box. 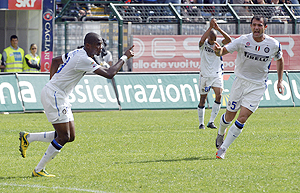 The absence of the injured Diego Milito meant Eto'o could take centre stage in attack and he looks a different player to the workhorse who toiled during last term's treble triumph.

His strike was the perfect riposte to the Cagliari fans whose racist chants towards him caused the referee to suspend the game after three minutes of play.

A public announcement was made asking fans to stop the chants, which they did for the rest of the match. The game restarted after around three minutes.

The Italian soccer federation, which has long struggled with racist fans, gave referees the right to suspend games in case of such chanting after Mario Balotelli was constantly abused in Inter's match at Juventus two seasons ago.

The game had already caused controversy after becoming the first high-profile match to be selected for this term's new 1230 local time kick off, which is aimed at catching Asian audiences but has angered Italian fans who believe the start is too early.

The previous 1230 games have been lacklustre, partly because of the heat, but cooling temperatures in Sardinia and two committed sides led to an engaging encounter.

Eto'o had another decent effort and Maicon headed wide on the stroke of halftime but the hosts also went close when they hit the bar and Julio Cesar was forced into a good double save.

As well as Milito, Inter were without injury victims Goran Pandev and Esteban Cambiasso with youngsters Coutinho and Jonathan Biabiany again forced to start on the wings.

Substitute Thiago Motta made his first appearance this term after knee surgery but looked uncomfortable and may be doubtful for Wednesday's Champions League match with Tottenham Hotspur.

"I'm happy, I was keen to return," captain Zanetti told Sky. "Cagliari put us under pressure but we deserved the lead. Eto'o is enjoying a great moment and we hope he continues like this."

© Copyright 2022 Reuters Limited. All rights reserved. Republication or redistribution of Reuters content, including by framing or similar means, is expressly prohibited without the prior written consent of Reuters. Reuters shall not be liable for any errors or delays in the content, or for any actions taken in reliance thereon.
Related News: Cagliari, Inter Milan, Diego Milito, Javier Zanetti, Jonathan Biabiany
COMMENT
Print this article
Maradona rejects return for Argentina 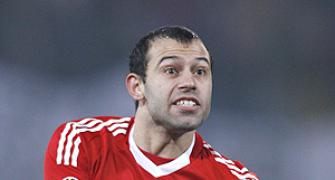 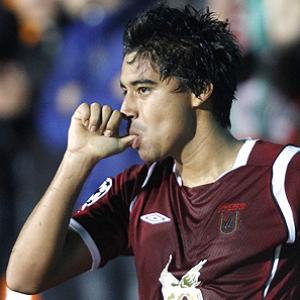