Serena ready to take New York spotlight at US Open 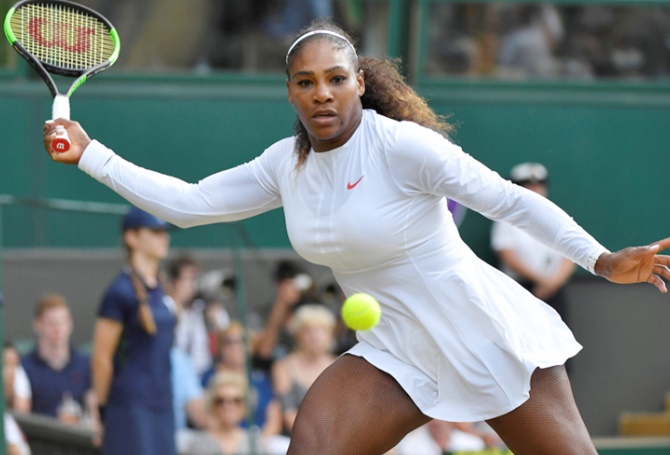 IMAGE: All eyes will be on Serena Williams. Photograph: Toby Melville/Reuters

Sloane Stephens will be defending her title at the US Open but all eyes will be on Serena Williams over the coming two weeks as the six-times champion attempts to win her first Grand Slam title since becoming a mother.

The tournament will be the third Grand Slam since Williams returned to competition after giving birth last September, and while she has yet to lift a title in 2018 the former world number one has such a formidable record at the USTA Billie Jean King National Tennis Center that she can never be counted out.

Williams was cruising along at the French Open until a pectoral injury forced her to withdraw ahead of her last 16 match, and she finished runner-up at Wimbledon, where she showed she has lost none of her fighting spirit.

However, the 36-year-old has not had a smooth buildup to the US Open with early exits at San Jose and Cincinnati.

Chris Evert, an 18-time Grand Slam champion, said in a conference call Williams was fighting to get back to her best and would be in with a chance at the Aug. 27 to Sept. 9 tournament.

"I just feel as I've seen her progress this summer and I hear her say she can feel it and taste it and she's close ... and you know she is working harder," Evert, now an ESPN tennis analyst, said.

Should Williams prevail she would equal Margaret Court's record of 24 Grand Slam titles, although not all of Australian Court's were claimed during the professional era.

A win in two weeks would also put Williams, who has been seeded 17th, nine spots above her world ranking, in the company of Court, Evonne Goolagong and Kim Clijsters as the only mothers to win Grand Slam titles in the professional era.

Evert suggested it might be difficult for Williams to switch off from her mother role to become the fierce competitor she has to be to win a Grand Slam.

"It doesn't switch on and off. It's there. Even if it's not consciously there when she's on the court it's in the back of her mind and it will creep in I'm sure once in a while because she's not a robot," said Evert.

"It is very difficult and, even more than the physical part, the emotional part is the toughest one to try and figure out for Serena to be successful and to get back to being number one."

Among the other top contenders are in-form world number one Simona Halep, Stephens and Wimbledon champion Angelique Kerber.

Halep has been playing with confidence since winning the French Open and her preparations for the US Open included a win at Montreal before reaching the Cincinnati final, though she pulled out from Connecticut to rest an Achilles injury.

"She's confident, you can see it. She gets herself out of holes," Evert said of the Romanian. "The last couple weeks she was down in matches and she pulled these matches out."

"That's Serena-like and she's starting to do it now because she has that belief in herself."

Reigning champion Stephens, who lost to Halep in the final at Roland Garros, is a career-high third in the world rankings and while the 25-year-old has worked hard to shed her reputation as a nervous player she will face the pressure of trying to defend a Grand Slam title for the first time.

"It just is going to be if she can get the crowd on her side and be inspired. I think she can win this tournament but it all depends on Sloane and how she reacts to the pressure."