Serena falls in generational clash against Emma; Osaka out Rising teenager Emma Raducanu came out on the winning side of a generational clash against tennis icon Serena Williams with a 6-4, 6-0 win in their first-round meeting at the Cincinnati Open on Tuesday.

After a sluggish start, the 23-time Grand Slam champion finally gave the supportive sold-out crowd something to cheer about when she crushed back-to-back aces to cut Raducanu's lead to 4-3.

But the English reigning US Open champion fired an ace of her own to snag the first set and followed that up with a break of serve to open the second.

Raducanu rolled from there, smacking an unreturnable serve on match point to end their first career meeting.

"I think we all just need to honor Serena and her amazing career," Raducanu said in an on-court interview.

"I'm so grateful for the experience of getting to play her and for our careers to have crossed over. Everything she has achieved is so inspirational and it was a true honour to get to share the court with her." 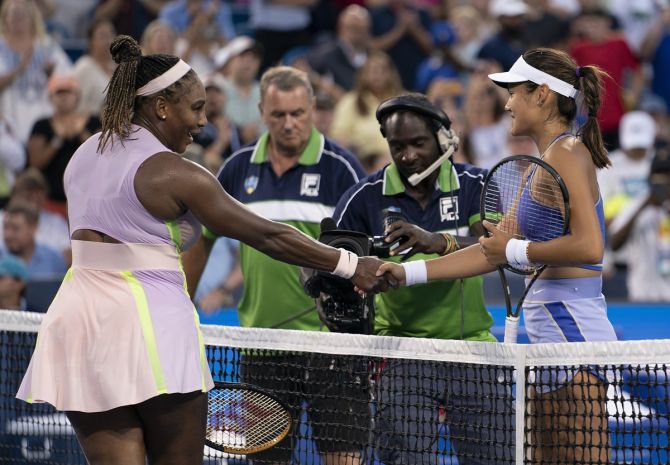 Williams, 40, was world number one and had already won four major titles when Raducanu was born in November 2002.

Williams won her last major in 2017 while pregnant with her daughter Olympia, who was in attendance.

With the loss, Williams has just one professional tournament remaining before she drops the curtain on her historic career - the US Open, which begins Aug. 29.

Earlier in the day, Naomi Osaka's US Open preparations suffered another setback as the former world number one was swept aside 6-4, 7-5 by China's Zhang Shuai.

It was only Osaka's third tournament back from an Achilles injury and it has been a stuttering return to action for the twice US Open champion, who also exited in the opening round in Toronto last week, retiring with lower back pain.

For Zhang, doubles champion in Cincinnati last year, it was her first singles win at the event since 2014.

"Naomi she is amazing but I don't know she is maybe not really feeling good today," said Zhang. "But for sure today - not her best today."

The first match on Centre Court, Japan's Osaka got the contest off to a sluggish start by double-faulting to gift Zhang a break on her opening serve.

That was all the help Zhang needed as she went on to take the first set with the 33-year-old Chinese player then quickly gaining the upper hand in the second with an early break to go ahead 2-1 as Osaka continued to misfire.

With Zhang serving for the match at 5-4, Osaka finally secured an elusive break to level the set only for her opponent to immediately break back and regain control.

Serving for the match a second time, Zhang did not squander the opportunity again, clinching victory with an ace.

Osaka got her serve working as she fired down 10 aces but not much else, with the four-time Grand Slam winner piling up 29 unforced errors and converting just one of four break chances.

American teenager Coco Gauff rolled her left ankle late in the first set in her match against qualifier Marie Bouzkova and she eventually retired from the match while trailing 7-5 1-0.

The newly-crowned world number one in doubles will look to recover ahead of the US Open where she will hope to compete for a first Grand Slam title.

This year's major at Flushing Meadows starts on Aug. 29.

Venus Williams, bidding for her first win over a top-20 ranked opponent since overcoming Kiki Bertens in Cincinnati three years ago, excited a half-filled Centre Court when she broke Pliskova to go up 3-2.

However, the Czech got back on level terms at 4-4 and broke again to clinch the opening set.

The 42-year-old Williams ran out of steam and ideas in a lopsided second set as Pliskova broke the seven-times Grand Slam winner at the first opportunity on the way to a 3-0 lead.

Williams held serve at 3-1 but Pliskova, the 2016 Cincinnati champion, swept the next three games to cap a rout.