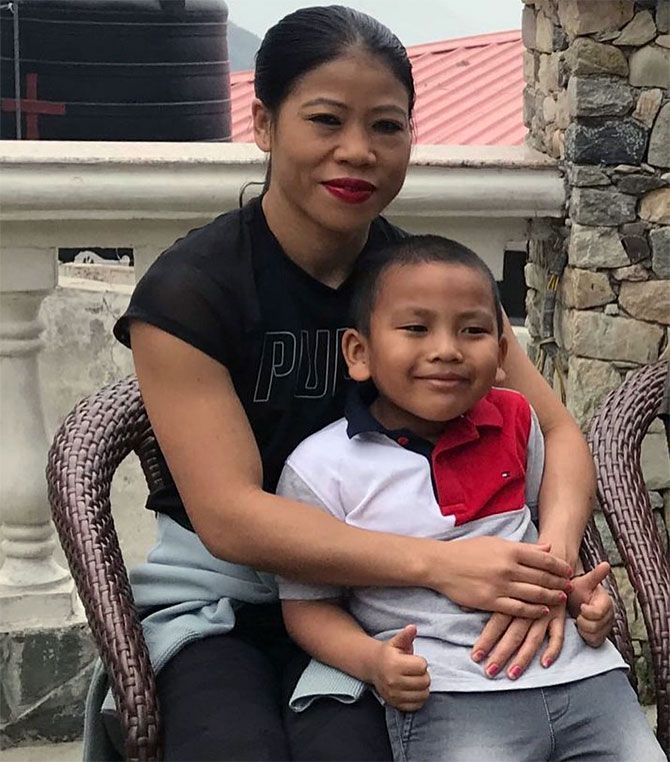 Prince, who turned seven, was pleasantly surprised as Tughlaq Road police officers led by Deputy Commissioner of Police Pragya Tiwari presented him with a birthday cake before singing the birthday song.

Mary Kom -- who is also a member of the Rajya Sabha -- thanked the Delhi police for making her son's birthday 'special'.

'Thank you @DCPNewDelhi for making this birthday so special for my younger son Prince Kom. You all are real frontline warriors, I salute you all for your dedication and commitment. @CPDelhi @DelhiPolice @LtGovDelhi @pragya_92,' the London Olympics bronze medallist tweeted.

The six-time World champion has three sons, Prince and 13-year-old twins Rechungvar and Khupneivar, and a daughter Neivar Merilyn.

Mary's preparations for the Tokyo Olympics, which were postponed to next year due to the coronavirus pandemic, have been hit due to the lockdown and the champion has been forced to train indoors.

Last month, she hailed the country's frontline workers, saying, 'I salute them for what they are doing. They are working for us and for our country.'