'The rickshaw pullers who have so many times offered me free rides to-and-fro to local matches, that local vendor and shopkeeper who had gifted me so many free packets of food after heart-warming performances -- I felt I needed to pay them back.' 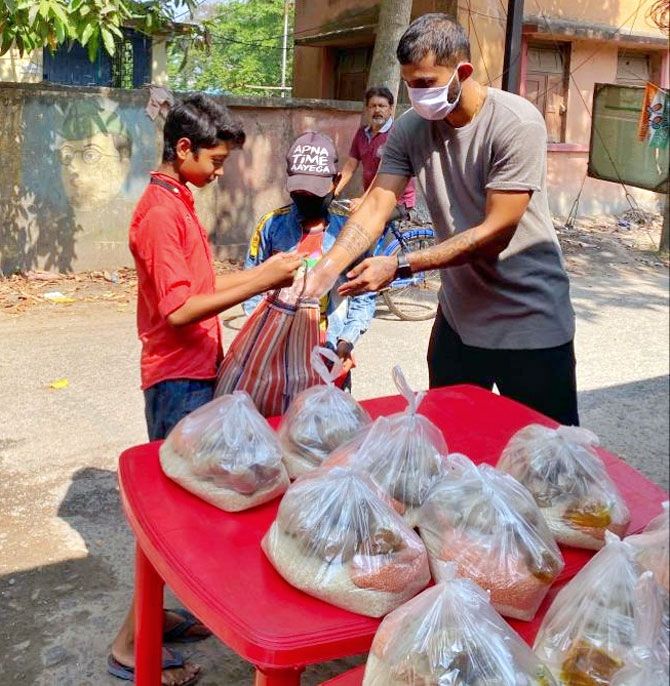 If India footballer CK Vineeth has joined the government COVID-19 helpline centre in Kerala, his national team-mate Subhashish Bose has taken it upon himself to feed the homeless and jobless in his home town Subhasgram in South 24 Parganas, West Bengal.

Amid the nationwide lockdown, a long queue could be seen every morning at Subhasgram comprising of local rickshaw pullers, daily wage earners or small time hawkers who come to collect their daily ration.

Bose, a member of the 'Blue Tigers' would be at the other end, happily distributing packets containing rice, pulses, potatoes, onions and other staple food items. This is his way of paying back to the society.

"The rickshaw pullers who have so many times offered me free rides to-and-fro to local matches, that local vendor and shopkeeper who had gifted me so many free packets of food after heart-warming performances -- I felt I needed to pay them back," the India left-back said of his daily regime since Friday.

"It was such a satisfaction to hand over some food items to lot many known faces whom I have known in my locality over my upbringing."

India had imposed a nationwide lockdown since March 24 to curb the spread of coronavirus pandemic and the worst-hit were people from the lower strata of the society whose life revolve around their daily wages.

The 24-year-old footballer revealed that one fine morning he felt restless and was awakened by the Swami Vivekananda's soul-stirring words 'Arise, Awake, And Stop Not Till the Goal is Reached!'

"It kept on reverberating between my ears. My conscience did not allow me to shy away -- rather it kept on pushing me to give it back to the society where I have grown up."

"Somewhere down the line, however, I felt restless. It's understandable that even as we need to Stay Home Stay Safe, there have been so many brave hearts who have cared less for their lives, and are out to serve the country in this troubled time -- the doctors, nurses, cleaners, police, journalists, etc.

It's not only the frontline workers, who are put their lives on line but citizens need to do their bit, reckons Bose.

"But are they enough? Can we all just sit back on our cosy rooms, and expect the privilege of others keeping us safe? Don't we need more volunteers? And eventually, I had to move out -- not for fun, not to have a roam, but try to lend a helping hand," he said.

He is thankfu to god that he has made a decent living as a footballer playing in the Indian Super League and for the Indian team.

"God is kind, that today I am able to help them. Thank you, Lord for providing me with the strength. All of that was done by maintaining social distancing, and proper protection.

"All of them whom I handed over packets wanted to hug me but couldn't because of the social distancing.

"Some of them had tears in their eyes. Their hugs can wait as we need nrmalcy to return. Till then stay home, and stay safe," he added.

The Mumbai City FC defender was looking forward to the Indian camp when the pandemic halted all sporting activities.

"A longer camp for the national team was planned and we were forward to it. But under current circumstances all sporting action around the world has been postponed."

Asked whether he's missing the game, he replied: "Human lives are of utmost importance, and like everyone around us, I look forward for normalcy to return soon."

The defender however regrets that he is not able to go out for runs so he is making the best use of the time at his private gym.

"I cannot go out for my runs. So I am trying to keep myself as much fit as possible indoors. I try to sweat out at least two hours a day in my personal gym so that I stay in proper shape when the season resumes.

"There is also monitoring from the medical staff, and we need to strict to the regimes provided," he said. 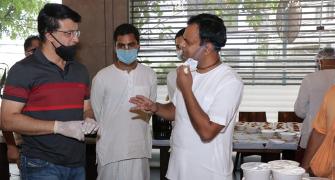 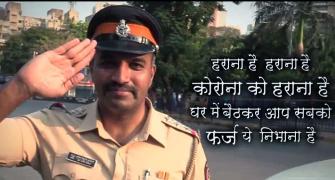 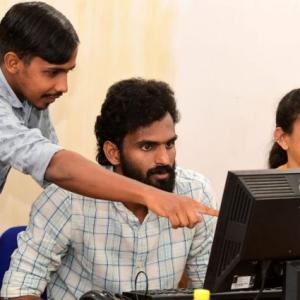