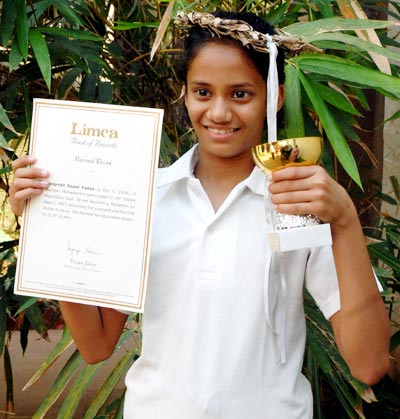 Andheri lass Swapnali Yadav is the 'Little Mermaid' in the world of swimming.

Last year, on September 1, she became the only swimmer from India chosen by world governing body, FINA, to participate and represent her country in the 19th Open World Swimming Marathon (OWSM), organised by the Greece Swimming Association, under the aegis of FINA, in Kalamata, Greece.

At eight years and seven months, Swapnali became the youngest-ever in Open World Swimming Marathon history and joined an elite group of 16 swimmers from around the globe between the ages of 22 and 49, which included 23-year-old English Channel swimmer Cech David of the Czech Republic and Olympian Ilija.

Two years on she's created history, being declared the youngest-ever in the world and the first Indian to swim the 30km Messinikos Gulf in Greece and qualify for the Limca Book of Records 2008-09 !!!

This feat will never be achieved after FINA, in 2008, declared that swimmers below 17 years cannot attempt the Messinikos Gulf.

The organisers had set a target of 12 hours to complete the marathon, but Swapnali stunned the world by completing the stretch in an impressive time of 11 hours, 10 minutes!

"Though I have done the Uran-Gateway and Dharamtar-Gateway trips, the experience in Greece was unforgettable. There was a lot to learn and I received so much support from all around. I also was delighted to complete the race in 11 hours, 10 minutes, because the ogranisers set me a 12-hour deadline," said a beaming Swapnali, now 10 years old, at a media conference in Mumbai on Tuesday.

"I went into the water with a lot of confidence. That comes from my passion for swimming. Moreover, I was swimming with former Olympians and English Channel swimmers, which was very encouraging and enhanced my confidence," she recalled.

While 14 swimmers, including Swapnali, completed the marathon, 24-year-old Leandro Rios of Argentina and 43-year-old Adel Ibrahim of Egypt dropped out midway.

"I knew I had to finish the race. I trained very hard for the occasion. I am proud that I was among the 14 who completed the race especially after being the youngest-ever," Swapnali added.

A product of the Raigad Military School, Oshiwara, the Class V student trained rigorously for the Messinikos Gulf swim for four years at the Prabodhankar Thackeray Swimming Pool, Vile Parle and Ozone, Goregaon, in Mumbai, under ace coach Raju Palkar.

Swapnali was spotted by Subhash Desai at the OZONE swimming  pool when she was just six years old. Later, she was moulded into a young long distance swimmer by the renowned Raju Palkar, the only long distance national coach recognized by the Swimming Federation of India (FSI).

"There is a lot more to achieve. In the near future, I hope to attempt significant challenges. I also hope my effort inspires other swimmers my age to achieve similar feats and much more," she suggested.

"I also believe we swimmers, especially those who achieve so much individually after making so many sacrifices, deserve much more recognition from the media, who I think are only cricket-crazy. Long distance swimming is not easy. Aren't we making a significant effort?" asked Swapnali.