Sania lost to Peng Shuai of China in the quarter-finals of the WTA event at Charleston in the United States but earned enough points to total 882 and jump to the 73rd spot.

In the doubles individual rankings, her title win at Charleston, partnering Elena Vesnina of Russia, took Sania to 29th position, four places up from previous week.

In ATP rankings, Somdev Devvarman, who reached the pre-quarterfinals in US Clay Court Championships in Houston last week, lost one spot to be at 72nd though he remained the highest-ranked Indian.

Mahesh Bhupathi and Leander Paes maintained their number one position in the men's doubles team rankings but have the same 2,630 points with American brothers Bob and Mike Bryan. In men's doubles individual rankings, Bhupathi remains unchanged at the fifth position while Paes is two rungs down. 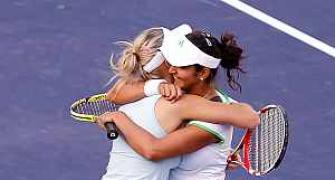