Sampdoria president Massimo Ferrero has been banned for three months and fined 10,000 euros ($12,400) for referring to Inter Milan's Indonesian owner Erick Thohir as "that Filipino" and saying he should leave the club.

A fine of 35,000 euros was also imposed on Sampdoria by the Italian football federation's (FIGC) disciplinary tribunal following the outburst in October, the FIGC said in a statement on Monday.

Ferrero made the comments when he was discussing former Inter owner Massimo Moratti's decision to resign as honorary president amid media reports of a disagreement with Thohir. 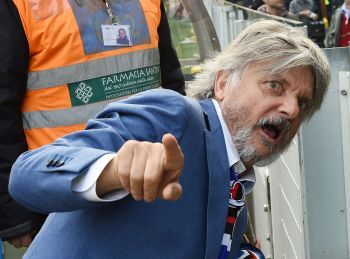 "Moratti is a great man and it seems unfair he has been treated like this because he has given so much to Italian football," Ferrero told state broadcaster RAI.

"I am very sad for him. I had told him: kick out that Filipino."

When the presenter of the live TV programme told him that Thohir was Indonesian, Ferrero replied: "Don't defend him, he's insulted an emblem of Italian football" before quickly apologising.

He caused an outcry when he made a comment about a fictitious African player he named Opti Poba "eating bananas" during a campaign in which he beat former Italy and AC Milan midfielder Demetrio Albertini for the FIGC presidency.

An FIGC investigation found there was no case against Tavecchio but a separate probe by European soccer's governing body barred him from holding any position within UEFA for six months or taking part in next year's Congress.