As Sebastian Coe walked briskly into a glass-fronted office at the headquarters of London's 2012 Olympic Committee on Monday he passed a grainy black and white picture of the standing high jump at the 1908 Games.

Apart from the outdated technique of the athlete in the photograph taken at London's long-gone White City stadium, the other curiosity was the almost complete lack of spectators.

As tickets for London's third Olympic Games went on sale on Tuesday and a clock in Trafalgar Square began counting down the 500 days before the torch is lit, LOCOG (London Organising Committee of the Olympic and Paralympic Games) chairman Coe is confident that filling seats will not be a problem. 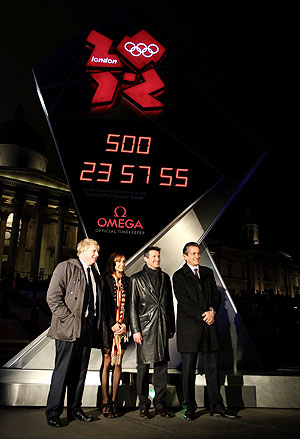 So confident in fact that despite having 6.6 million tickets ranging from 20 pounds ($32.35) to 2012 pounds to shift in what Coe called the third-largest online proposition of all time, he was urging fans to "take their time".

Fans in Britain and the European Union have a 42-day period in which to visit LOCOG's official ticket website (www.tickets.london2012.com) and choose from the 645 separate sessions for the 26 sports at the Games.

One million tickets are also available to overseas fans through their national Olympic associations.

Middle-distance great Coe, known for the smooth acceleration that earned him Olympic golds in Moscow and Los Angeles in 1980 and 1984, said there was no need to sit glued to a laptop on the first day of ticket sales.

"I really hope people don't rush to get their tickets because there's no need to," Coe told Reuters on the 23rd floor of the LOCOG office block that commands views across to the Olympic Stadium and other 2012 venues.

"There is no more statistical chance to get the tickets you want on March 15 than there is on April 26 when the application period closes. The important thing is that people choose the sports, the sessions and the venues they want at their leisure."

Tickets for sessions that are over-subscribed will be allocated by ballot and with 2.5 million tickets priced at 20 pounds or less, and a crack Metropolitan Police team in place to deter fraudsters, Coe is hopeful the seats in the various gleaming venues will be occupied by proper fans.

"Hopefully we'll get the tickets into the hands of the people who really want them at prices they can afford and if you do that they tend to stick in that hand," Coe said.

While tickets to watch Usain Bolt in the 100 metres will be like gold dust, Coe said he was hopeful that even in tough economic times the public would fork out for sports that normally attract little interest in soccer-saturated Britain.

"The opening ceremony has a life of its own and Usian Bolt will be a huge draw. Personally I've always seen the blue riband event as the 1,500 metres but we are also a nation of cyclists and swimmers too and there will be interest across the board," he added.

"I think people will just want a ticket to say they were at the Games that hadn't been in their own backyard for 64 years.

"There is more than a possibility the Games will be a sell-out before the opening ceremony."

Describing the ticket website going live as a "major landmark" for LOCOG after five years of planning, Coe remained cautious about the months ahead as venues are fitted out and the test events are scheduled.

"The closest track and field analogy I can give you is we are on the back straight of the last lap," he said. "We are not in the finishing straight or anywhere near there just yet.

"There is a mountain of work to do but what I'm comfortable with is the things that are within our control we have under control. But unexpected things do come at you."

© Copyright 2022 Reuters Limited. All rights reserved. Republication or redistribution of Reuters content, including by framing or similar means, is expressly prohibited without the prior written consent of Reuters. Reuters shall not be liable for any errors or delays in the content, or for any actions taken in reliance thereon.
Related News: LOCOG, London Organising Committee, European Union, Metropolitan Police, Britain
COMMENT
Print this article
No peace talks in Britain, says ex-Taliban envoy
Kalmadi aide Jayachandran gets bail in CWG case 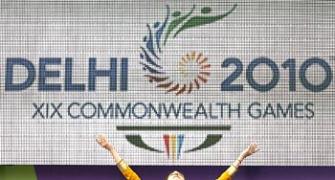