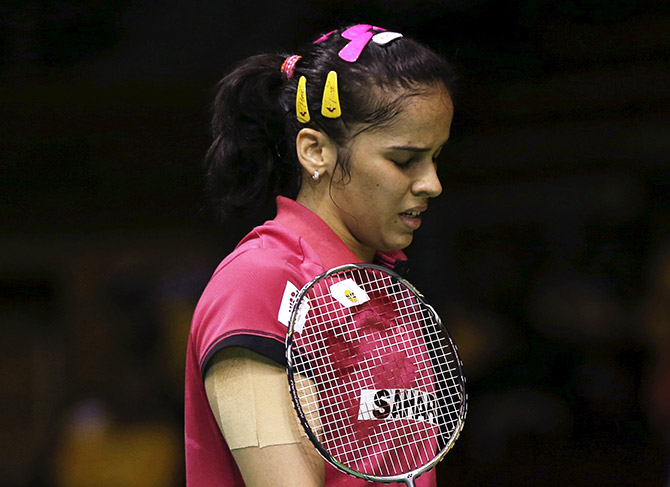 Saina Nehwal suffered a shocking first round loss to world number 212 Wang Zhiyi of China to exit the New Zealand Open, in Auckland, on Wednesday.

Earlier in the day, the pair of Ashwini Ponnappa and N Sikki Reddy fought hard against Chinese duo of Liu Xuanxuan and Xia Yuting before going down 14-21, 23-21, 14-21.

But the men's doubles pair of Manu Attri and B Sumeeth Reddy registered a win over New Zealand's Joshua Feng and Jack Jiang 21-17, 21-10.

Saina, a World Championship silver medallist, trailed 0-4 in the first game and was unable to keep up with her opponent losing 16-21.

Wang stretched Saina in the second game which the Indian won 23-21. There was no fightback from the Indian in the decider as Wang won eight consecutive points to win it easily.

Anura Prabhudesai also lost to World No 15 Li Xuerui 9-21, 10-21 in singles first round on a disappointing day for Indian shuttlers.