'Saina has just joined. She will probably start training at the Gopichand academy in a couple of weeks. She wants to get fitter and reach a decent level.' 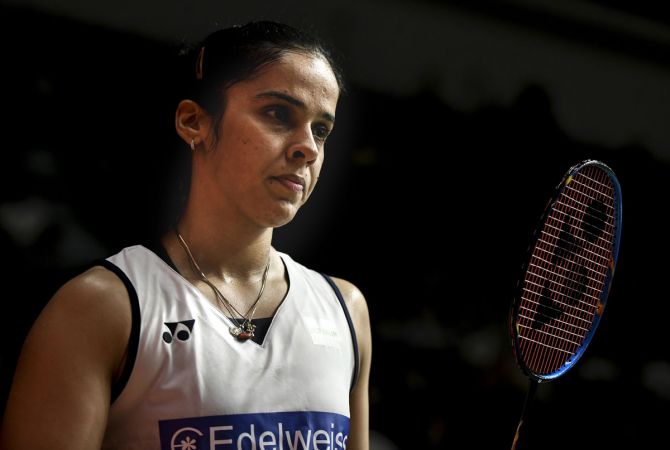 IMAGE: Saina Nehwal is one of the eight Olympic hopefuls who have been allowed by the Sports Authority of India (SAI) to resume training at the SAI-Pullela Gopichand Academy from August 7. Photograph: Robertus Pudyanto/Getty Images

London Olympics bronze-medallist Saina Nehwal resumed training at a separate facility in Hyderabad after the COVID-19-induced break and is likely to join the national camp at the Sports Authority of India-Pullela Gopichand Academy in a couple of weeks.

Saina is one of the eight Olympic hopefuls who have been allowed by the Sports Authority of India (SAI) to resume training at the SAI-Pullela Gopichand Academy from August 7 following the Telangana government's approval on August 1.

However, the former World No 1 has, for the time being, decided to train with shuttler husband Parupalli Kashyap and 2014 Commonwealth Games bronze medallist RMV Gurusaidutt at a different centre near the Gopichand academy.

"We have been training at a centre near the Gopichand academy for a week now. It is a small facility. We started with the basics as it was after a long time that we were hitting the court," Kashyap, a former Commonwealth Games champion, said.

"Saina has just joined. She will probably start training at the Gopichand academy in a couple of weeks. She wants to get fitter and reach a decent level. She has sought the permission of Gopi sir and discussed it with new Indonesian coach Agus Dwi Santoso," he added.

Kashyap, who is currently ranked 24th in the world, believes the Gopichand academy is equipped with enough courts to accommodate a few more players, who can start training by following social distancing and other regulations laid down by SAI.

"Out of eight players, Chirag (Shetty), Satwiksairaj (Rankireddy) and Ashwini (Ponnappa) are not in Hyderabad right now so basically only 4-5 players are training. There are nine courts and players generally train for an hour or two, so I think few more players can be allowed to train there," said the London Olympics quarter-finalist.

"Since badminton is not a contact sport so it can be done. In Bangalore, everyone is training and you need good sparring partners. How long can just eight players train?".

Former World No 6 Kashyap and doubles specialist B Sumeeth Reddy are also based in Hyderabad.

World champion P V Sindhu, along with B Sai Praneeth and N Sikki Reddy, resumed training on Friday under strict safety protocols at the Gopichand Academy in Hyderabad, ending a four-month-long coronavirus-forced hiatus.

Among the other Olympic hopefuls, the men's doubles pairing of Chirag and Satwiksairaj, who are currently in Mumbai and Amalapuram (Andhra Pradesh) respectively, are wary of the COVID-19 threat and will wait for another couple of weeks before deciding on joining the camp.

The Bangalore-based shuttler is currently training at the Prakash Padukone Badminton Academy.

Former World No 1 Kidambi Srikanth, who is based in Guntur, is set to resume training this week.