The Indian cricket team was given a big thumbs up by major badminton players on Saturday.

While Mahendra Singh Dhoni's men are clear favourites going into the event, beginning February 19, they are going to win the flagship event if Saina Nehwal is to be believed.

"They have a very good chance of winning the tournament," said Saina, adding, "they have been playing quite well for some time and it would be nice if they can round it off by winning the Cup. 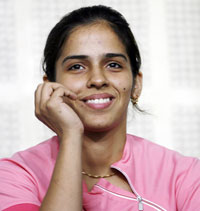 "Considering the form they are in at the moment, I am confident they will put up a good show at the event."

The badminton ace said this on the sidelines of a function to honour the greats of the world's fastest racket sport at the Bombay Gymkhana.

Jwala Guta, a doubles gold medallist at the 2010 Comonwealth Games, seemed to concur with her compatriot.

"It will be great if they (Team India) win the World Cup," said Jwala, adding, "this would be even more special considering the fact that the tournament is being held in our country."

"They have been doing well recently and it won't be surprising if they go on to win the tournament," said Gopichand.