Saina, Jwala-Ashwini enter second round of All England

Ace Indian shuttler Saina Nehwal survived a scare from lower-ranked Sapsiree Taerattanachai of Thailand before reaching the second round of the All England Championship in Birmingham.

Jwala Gutta and Ashwini Ponnappa also made a positive start to their campaign, beating Indonesian pair of Anneke Feinya Agustin and Nitya Krishinda Maheswari 21-16, 21-16 in the women's doubles.

The Commonwealth Games gold medallist will next take on second seeded Chinese combo of Qing Tian and Yunlei Zhao in the second round on Thursday.

In the women's singles, Saina took little time to get off the mark as she surged ahead to a 6-1 lead and maintained the distance with her Thai rival to pocket the first game without any problem.

In the second game, Sapsiree opened up a narrow 2-0 lead and then slowly made her way to lead 7-4. Saina caught up with the Thai at 8-8 but the world number 33 broke off at 10-all and soon bounced back into contention winning the game.

In the decider, Saina gathered herself once again and, from 5-5, kept her nose ahead to eventually seal the issue comfortably.

Jwala and V Diju, however, suffered their second successive first round loss when they lost to Peng Soon Chan and Liu Ying Goh 14-21, 12-21 in the mixed doubles match which lasted for just 26 minutes. 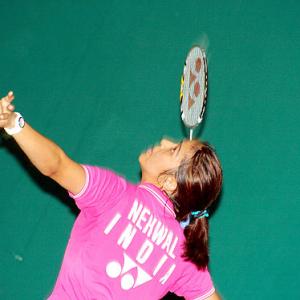 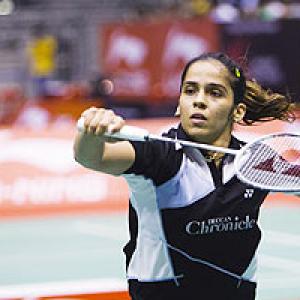