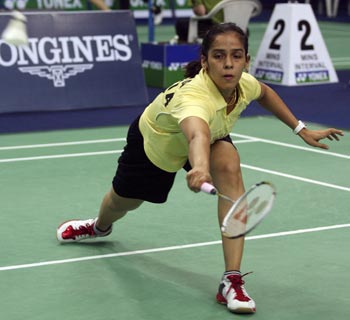 Indian campaign in the World Super Series Masters Final got off to a disappointing start with ace shuttler Saina Nehwal and the mixed doubles pair of Jwala Gutta and V Diju biting dust in their first outing in Johor Bahru on Wednesday.

The world number eight Saina could not do justice to her reputation and went down 13-21, 21-13, 14-21 to Malaysian Wong Mew Choo in a hard-fought 50-minute Group A match of the women's singles event.

Saina will now have to win her next two matches against Porntip Buranaprasertsuk of Thailand and Canadian Charmaine Reid to keep her semifinal hopes alive.

Jwala and Diju also failed to bring smile to the Indian camp as the duo lost 15-21, 16-21 to the English pair of Anthony Clark and Donna Kellogg in just 28 minutes.

They now face a similar situation of winning the next two matches to stay afloat. It was a particularly disappointing outing for Saina.

The 20-year-old Hyderabadi played an aggressive game, pocketing 11 smash winners against Wong's six but she couldn't handle the deft net play of her rival, who bagged 21 net winners compared to Saina's 11.

In the first game, Wong erased the 0-2 deficit in no time and surged ahead opening up a 7-4 lead and then held the fort while Saina's game crumbled.

The Indonesian Super Series winner, however, bounced back in the next game and from tied 4-4 pocketed six straight points to make it 10-4 and though the Malaysian tried to narrow the gap, Saina sealed the game in her name.

In the decider, Wong thumped her authority and didn't give Saina any chance to come back into the game. She first opened a four-point lead and had the last laugh.