Another poor day for Woods as inexplicable Cup record continues

With Europe leading 10-6, US captain Furyk could at least draw strength from the knowledge that the same deficit has twice been overturned on Sundays in recent times -- by the US in 1999 and Europe in 2012. 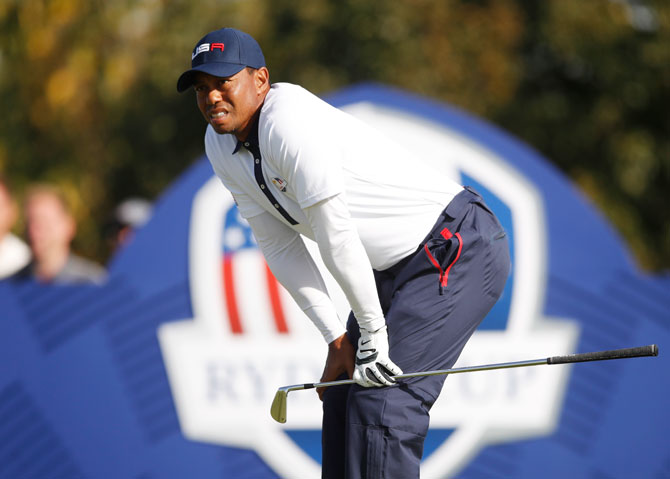 Tiger Woods's Ryder Cup record went from bad to worse when he lost two more matches on Saturday, extinguishing a theory that a warmer, cuddlier, middle-aged cat would finally shine in the team format.

The second most prolific major champion of all time now has nine wins, 19 losses and one halved match in Ryder Cup fourball and foursomes.

He has lost seven consecutive times in the team format, a dreadful record that defies easy explanation, not that people will shy away from trying.

"He wasn't wired by his dad for partner matches," said two-times major champion Johnny Miller on the American NBC telecast. "(His father) designed him to do it on his own."

Woods said he had not played as poorly as his three losses suggested.

"Just pretty pissed off, the fact that I lost three matches, and didn't feel like I played poorly," he said.

"That's the frustrating thing about match play. We can play well and nothing can happen."

Woods goes into Sunday's singles with a 4-1-2 record in the format, where he has generally shone in the lone-wolf format.

Golf Channel analyst Brandel Chamblee thinks Woods has been a victim of his own aura, his mere presence negatively affecting his partners.

"Some of that (poor record) might be that Tiger Woods hasn't played his best golf but primarily it is that he hasn't had the support," said Chamblee, a former PGA Tour winner.

"Tiger Woods changes the atmosphere of the room through no fault of his own. He's just that big a presence."

Woods arrived in Paris on a high after ending a five-year victory drought when he won the Tour Championship in Atlanta on Sunday.

"I think the American team thought we've got this guy back again. They have got him back and they've got the same problem back," said analyst Frank Nobilo on Golf Channel.

Perhaps the expenditure of adrenaline from that victory, as well as jet lag, has contributed to his mediocre form at Le Golf National, though that explanation would be more convincing if he had arrived with a better career record.

At 42, and seemingly a changed man after defying the odds and recovering from a potentially career-ending back injury, Woods now embraces his team mates, and the younger generation feel comfortable around a man they revere as a father figure.

But it has not helped.

Woods has now had 14 different partners over the years. He has a winning record with only two, with Patrick Reed and Bryson DeChambeau joining an unsuccessful list.

Woods twice on Saturday had the misfortune to encounter his recent nemesis Francesco Molinari, who has teamed up with Tommy Fleetwood to go 4-0-0 this week.

It was Molinari who withstood Woods's charge at the British Open in July, staying calm amid frenzied scenes playing with the American, who electrified Carnoustie as he stormed into the lead halfway through the final round.

Two hours later the Italian was lifting the Claret Jug, having beaten Woods by three shots.

Captain Jim Furyk front-loaded his United States team with his most in-form players as the visitors set their sights on a Sunday singles comeback against Europe on the final day of the Ryder Cup.

With Europe leading 10-6, Furyk could at least draw strength from the knowledge that the same deficit has twice been overturned on Sundays in recent times -- by the US in 1999 and Europe in 2012.

The Americans won the first six singles matches 19 years ago, while Europe took the first five in 2012. On both occasions a hot start gave the players in the final pairings belief that a comeback was possible.

With Europe leading 10-6, Furyk could at least draw strength from the knowledge that the same deficit has twice been overturned on Sundays in recent times -- by the US in 1999 and Europe in 2012.

© Copyright 2020 Reuters Limited. All rights reserved. Republication or redistribution of Reuters content, including by framing or similar means, is expressly prohibited without the prior written consent of Reuters. Reuters shall not be liable for any errors or delays in the content, or for any actions taken in reliance thereon.
Related News: Tiger Woods, Jim Furyk, Europe, Le Golf National, Francesco Molinari
SHARE THIS STORYCOMMENT
Print this article