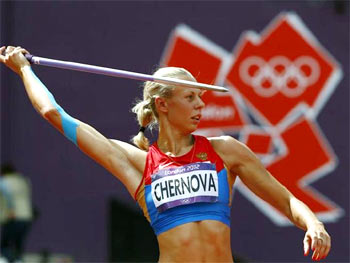 Russian heptathlete Tatyana Chernova will not be able to defend her world title next month in Moscow because of injury.

Chernova was the highest profile name missing on Tuesday from the team announced by the host nation for the world championships, along with world champion race walkers Valeriy Borchin and Sergey Bakulin.

Chernova, 25, suffered a knee ligament injury running the 100 metres hurdles during the Russian championships last week. Her rival, British Olympic champion Jessica Ennis-Hill, is also in danger of missing the championships because of injury.

"Of course it's a shame to miss the championships when they're being held at home," twice Olympic bronze medallist Chernova was quoted as saying by Russian media.

Russia has set a target of winning six gold medals at the championships, which start on August 10, and a total of 16 medals. It will be the first major outdoor athletics event hosted by Moscow since the 1980 Olympics.

© Copyright 2020 Reuters Limited. All rights reserved. Republication or redistribution of Reuters content, including by framing or similar means, is expressly prohibited without the prior written consent of Reuters. Reuters shall not be liable for any errors or delays in the content, or for any actions taken in reliance thereon.
Related News: Tatyana Chernova, Mariya Abakumova, Jessica Ennis-Hill, Anna Chicherova, Natalya Antyukh
SHARE THIS STORYCOMMENT
Print this article