England overcame a tough challenge from a brutal Argentina on the second day of the rugby World Cup on Saturday while the smaller nations showed that the gap to the top sides, so often a cause for concern at the tournament, may slowly be closing.

The 2003 World Cup winners, expected to battle with Argentina for top spot in Pool B, needed a late try from replacement scrumhalf Ben Youngs to eke out a 13-9 victory in a tough encounter in the new indoor Otago Stadium.

"I probably aged about 20 years, but we said that before we came here that's what World Cups are about, you will be in a game that isn't going your way ... and you have to find a way to win and we did," England manager Martin Johnson said in a televised interview.

"There were opportunities for both sides and they missed them and we were left with the win.

"It's not a fantastic performance by any means, but it's a fantastic win in the circumstances."

Japan almost produced a huge upset when they drew to within four points of Pool A heavyweights France late in the second half before Lionel Nallet, Pascal Pape and Morgan Parra scored tries in the final 10 minutes to put a gloss on the scoreline.

"Well done to the Japanese they have played very well," France coach Marc Lievremont told reporters after their 47-21 victory at North Harbour Stadium in Albany.

"(Japan coach) John Kirwan wanted to show how much Japan had progressed and I think he can be very satisfied with his team's performance. 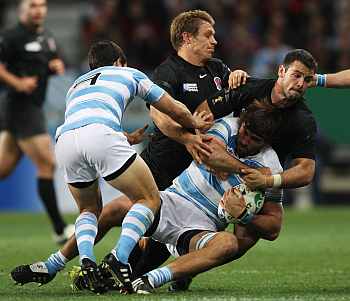 "I think Japan really deserved to not lose by such a difference."

Former All Blacks winger Kirwan was convinced that had Japan scored once more, they could have provided one of the biggest shocks in seven World Cup tournaments.

"We had them rattled but instead of scoring a try we turned the ball over or gave away a penalty," said Kirwan.

"Rugby is very much ebb and flow and when we had the flow on we probably just didn't get enough points. If we had scored when it was 25-21 it would have been a very exciting finish."

Romania also provided some nervous moments for their higher ranked opponents as their forwards destroyed Scotland's scrum for Dan Carpo to crash over and help his side take the lead with just six minutes remaining in Invercargill.

Winger Simon Danielli, however, broke a two-year international drought to score two late tries for the Scots to give them a 34-24 victory.

"We were a bit shell-shocked to find ourselves in that position," Danielli said. "I was thinking, 'we can't lose this game, we're not going to lose this game'.

"I was really pleased to get over the try-line, especially given the situation we were facing."

Fijian winger Vereniki Goneva, who did not make the 2007 World Cup squad, marked his debut with four tries as the Pacific islanders overcame a battling Namibia 49-25 in Rotorua.

"This is the first time I've scored four tries. It's an honour and a privilege," he told reporters.

"I missed out on the World Cup team last time, and it was my dream to make the team for this World Cup. It is my time."

Despite many hailing the success of the opening day celebrations around the country on Friday, red-faced local government officials in Auckland were forced to explain the failure of their rail system and overcrowding as people flooded onto the streets downtown.

Local media reported massive delays on the rail system to Eden Park, with fans missing the start of the New Zealand-Tonga match while some people abandoned stationary carriages and scrambled up banks on to the road.

World Cup Minister Murray McCully criticised officials on Saturday for the failure of the transport system and told them they must ensure it did not happen again during the tournament.

"Urgent steps will now need to be taken to ensure that these matters are rectified before the next large Eden Park match next weekend."

Organisers at least received some good news with ticket sales now at almost NZ$1million (517, 362 pounds) a day. Having reached $249 million in sales, they are now seemingly on track to reach their target of $268 million.

"We always expected sales to rise as the tournament comes alive across the country so its great to see so many New Zealanders now wanting to be ringside," tournament chief operating officer Therese Walsh said.

© Copyright 2020 Reuters Limited. All rights reserved. Republication or redistribution of Reuters content, including by framing or similar means, is expressly prohibited without the prior written consent of Reuters. Reuters shall not be liable for any errors or delays in the content, or for any actions taken in reliance thereon.
Related News: John Kirwan, Japan, Murray McCully, Simon Danielli, Argentina
SHARE THIS STORYCOMMENT
Print this article 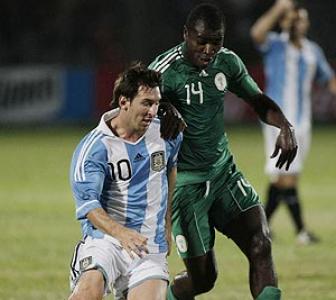 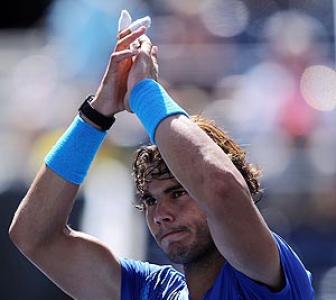 Nadal, Murray race through to US Open quarters