With his back to goal, Rooney struck with an acrobatic volley that flew into the top corner in the 78th minute, shattering third-placed City and leaving manager Alex Ferguson purring in delight and admiration.

"I've not seen anything like it, that's for sure," a beaming Ferguson told Sky Sports after a victory that stretched United's lead over second-placed Arsenal to seven points, pending the London club's later game at home to Wolverhampton Wanderers.

"It was stunning, unbelievable. We've had some fantastic goals here but in terms of the execution, you'll never see that," he added.

United had taken the lead shortly before halftime with a well-taken Nani effort before David Silva drew the visitors level with a fortuitous goal midway through the second half. 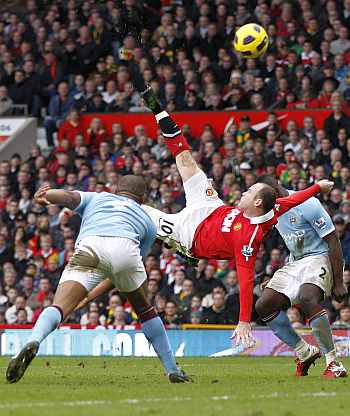 The result gave United 57 points from 26 games with Arsenal on 50 points from 25. City's title prospects are receding, as they are now eight points behind the leaders having played a game more.

A largely forgettable season for Rooney will now be remembered for a moment of magic that even had rival manager Roberto Mancini describing it as genius.

With his back to goal on the edge of the area, Rooney launched himself into the air to connect with a Nani cross, the ball arcing past City's dumbfounded keeper Joe Hart.

It was only his fifth goal of the season but a potentially vital one as United chase a record 19th title.

City, who had managed just one league win at Old Trafford in their previous 26 attempts, began the match in confident fashion and Silva should have scored in the opening minutes when he prodded a good chance fractionally wide of the post after being teed up by the livewire Carlos Tevez.

United, who suffered their first league defeat of the season last week at Wolves, struggled for attacking thrust with Rooney a frustrated figure alone up front with top scorer Dimitar Berbatov on the bench.

City were still the better side when they suffered a body blow four minutes before halftime.

Rooney won an aerial challenge and Giggs played a first-time pass to Portugal winger Nani whose exquisite first touch took him clear of Pablo Zabaleta before he calmly slid the ball past Hart.

It was tough on Roberto Mancini's side who had shown far more verve than they did in the home 0-0 draw with United in November despite starting with only Tevez as recognised striker.

Mancini sent on £30 million ($48.14 million) forward Edin Dzeko with half an hour remaining and he an immediate impact when his instant shot from fellow substitute Shaun Wright-Phillips's low cross deflected off Silva's back and past helpless keeper Edwin van der Sar.

A City victory looked possible but Rooney left them empty-handed with a goal of stunning quality that will be the talk of Manchester for weeks to come.

© Copyright 2020 Reuters Limited. All rights reserved. Republication or redistribution of Reuters content, including by framing or similar means, is expressly prohibited without the prior written consent of Reuters. Reuters shall not be liable for any errors or delays in the content, or for any actions taken in reliance thereon.
Related News: Wayne Rooney, Manchester United, David Silva, Manchester City, Roberto Mancini
SHARE THIS STORYCOMMENT
Print this article