Juve coach Maurizio Sarri, who claimed the first major Italian title of his career, blamed their problems on the unique situation caused by the three-month coronavirus stoppage which led to the championship race finishing in a hectic six weeks played at the height of summer.

IMAGES from the Serie A match played between Juventus and Sampdoria on Sunday. 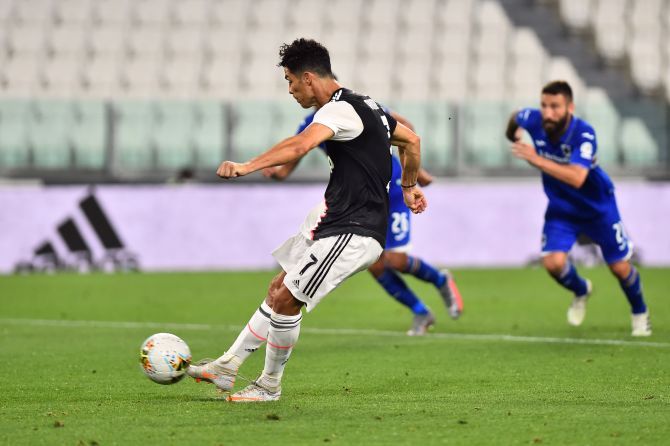 Juventus won Serie A for the ninth season in a row when Cristiano Ronaldo set them on the way to a 2-0 win over Sampdoria on Sunday although the Portuguese veteran missed a late penalty.

The 35-year-old broke the deadlock in first-half stoppage time with his 31st league goal of the season and Federico Bernardeschi added the second as Juve moved seven points clear of Inter Milan.

Juve, in their first season under coach Maurizio Sarri, clinched the title with two games to spare despite a stuttering run in which they won only one out of five matches before Sunday.

Sarri, who claimed the first major Italian title of his career, blamed their problems on the unique situation caused by the three-month coronavirus stoppage which led to the championship race finishing in a hectic six weeks played at the height of summer. 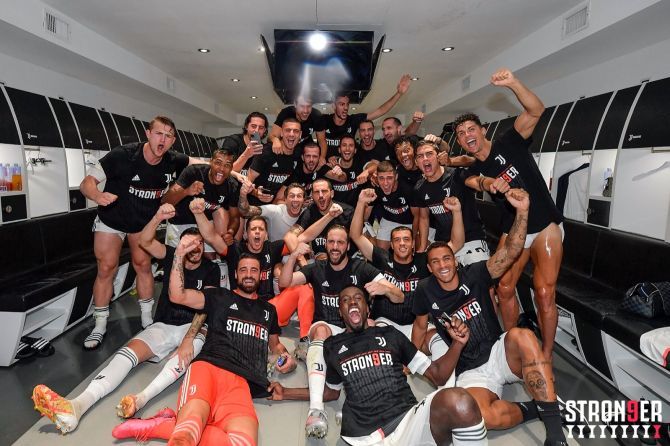 Juventus have 83 points while Inter, whose coach Antonio Conte led the Turin side to the first three titles of their present run, are on 76 and Atalanta and Lazio have 75 each.

Samp, who have climbed away from the relegation zone in the last few rounds and are 15th, had Morten Thorsby sent off for second bookable offence in the 76th minute.

Juventus lost two players to injury in the first half as defender Danilo had to go of after colliding with Gaston Ramriez and Paulo Dybala suffered a muscular injury to his left leg.

Fabio Quagliarella had Samp's best first-half chance when the ball was pulled back to him but his left-foot shot was weak and easily stopped by Wojciech Szczesny. 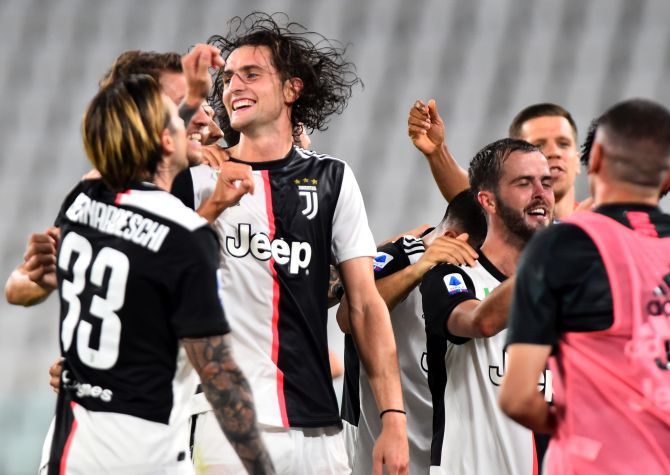 IMAGE: Juventus' Adrien Rabiot celebrates with teammates after winning the match and the Serie A title. Photograph: Massimo Pinca/Reuters

Juve went ahead from a free kick when Miralem Pjanic rolled the ball to Ronaldo and the Portuguese swept the ball home.

Sampdoria had a flurry of chances early in the second half.

Mehdi Leris sidefooted wide, Szczesny had to turn a looping Ramirez free kick around his post and Lorenzo Tonelli sent a powerful header narrowly wide from the resulting corner.

After those let-offs, Juve doubled their lead in 67th minute. Sampdoria goalkeeper Emil Audero could not hold Ronaldo's shot and Bernardeschi, who had replaced Danilo, snapped up the rebound.

Ronaldo's evening ended on a sour note when he smashed a penalty against the crossbar after Alex Sandro was fouled.