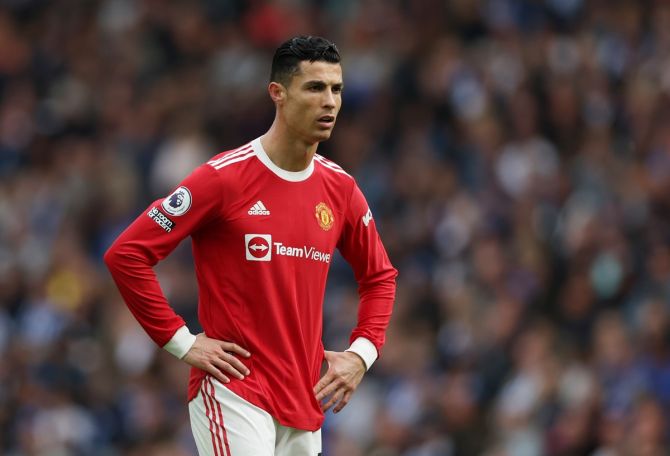 IMAGE: Cristiano Ronaldo re-signed for Manchester United from Juventus in August 2021 and was one of the few bright sparks for Ralf Rangnick's team last season, netting 24 times in all competitions. Photograph: Matthew Childs/Reuters

Manchester United forward Cristiano Ronaldo has told the Premier League club that he wants to leave in the close season because of his desire to play in the Champions League, The Times newspaper reported on Saturday.

Speculation has been rife about Ronaldo's future at United following a trophy-less campaign and their failure to qualify for the Champions League last season, although incoming manager Erik ten Hag has said the Portuguese international is part of his plans.

The report added that the 37-year-old believes that he can play at the elite level for another "three of four years".

Ronaldo re-signed for United from Juventus in August 2021 and was one of the few bright sparks for Ralf Rangnick's team last season, netting 24 times in all competitions.

The former Real Madrid attacker, who still has a year left on his contract at Old Trafford, has been linked in recent days with a move to Chelsea and Bayern Munich.