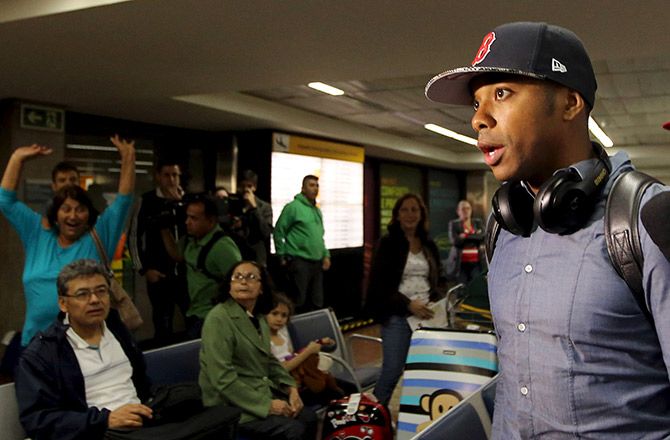 The 31-year-old former Real Madrid, Manchester City and AC Milan attacker, known for his elaborate stepovers, said he was hopeful of returning to Santos in the future after the club said they could not afford to match the offers from overseas.

"Unfortunately it will not be possible to renew my contract. But Santos FC will always be in my heart," Robinho said in a statement.

"FC Santos will go great, because it is above any player. I will try to remain happy doing what I like best, which is play football and hopefully one day return."

Brazil media said Robinho, who was part of the Brazil side that exited the Copa America on Thursday following a quarter-final penalty shootout defeat by Paraguay, would be joining four-times reigning Chinese champions Guangzhou.

The Chinese club appointed 2002 World Cup winning coach Scolari earlier this month after sacking Italian Fabio Cannavaro after less than half a season in charge.

Scolari has been quick to make changes and signed Brazilian midfielder Paulinho from English outfit Tottenham Hotspur on Monday for a reported fee of around $15 million.

Guangzhou, 2013 AFC Champions League winners, are not the only Chinese club to have lavished money on expensive internationals with Shanghai Shenhua paying $14.5 million to Turkish side Besiktas for Senegal international Demba Ba this week.

© Copyright 2021 Reuters Limited. All rights reserved. Republication or redistribution of Reuters content, including by framing or similar means, is expressly prohibited without the prior written consent of Reuters. Reuters shall not be liable for any errors or delays in the content, or for any actions taken in reliance thereon.
Related News: Robinho, Santos, Guangzhou Evergrande, Luiz Felipe Scolari, AFC
SHARE THIS STORYCOMMENT
Print this article