IMAGE: India’s Kidambi Srikanth attempts a drop at the net against Jan Jorgensen of Denmark in the men’s singles badminton match at the Rio Olympics on Monday. Photograph: Marcelo del Pozo /Reuters

Barring some encouraging display of badminton by shuttlers PV Sindhu and Kidambi Srikanth, there was little to cheer about as Indian athletes produced yet another below par performance at the 2016 Rio Olympics on Monday.

While Sindhu and Srikanth did well to progress to the quarters of the women’s and men’s badminton events respectively, the others withered away tamely.

In Track & Field events, Lalita Babar who had qualified for the 3000m steeplechase final, finished a commendable 10th with a timing of 9:22.74 seconds. 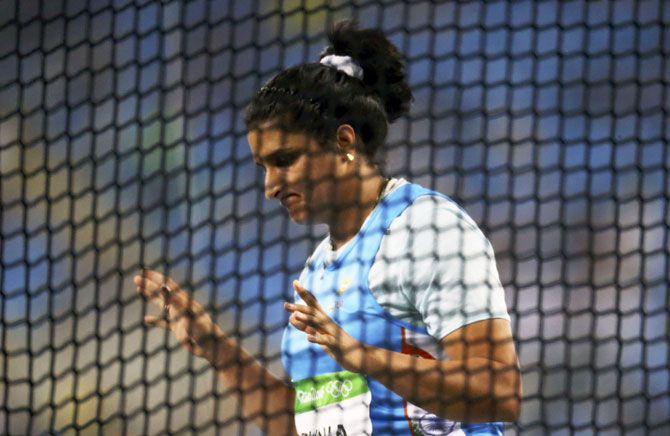 IMAGE: Seema Antil Punia of India reacts during the Women's Discus Throw Group B Qualifying Round at the Rio Olympics on Monday. Photograph: Ivan Alvarado/Reuters

The 33-year-old Seema began with 57.58m in her first attempt and then fouled her second try before hurling the disc to a distance of 56.78m to finish ninth in the Group B qualification round.

The final round qualifying mark was set at 62m.

It was also a no-show from Ravinder Khatri in the men's Greco-Roman 85 kg Qualification, having lost to Viktor Lorincz of Hungary 0-9.

There was also disappointment in the boxing arena, with former Asian Games gold-medallist Vikas Krishan (75kg) taking a pounding from second seed Bektemir Melikuziev in the quarter-finals to bow out of the Games, ending India's boxing challenge without a medal for the first time in eight years.

In the quarter-final contest on Monday, seventh-seeded Vikas was simply no match for Melikuziev, the world No.3, a World Championships silver-medallist and the reigning Asian champion, a title he won after beating Vikas in the final last year.

With Shiva Thapa (56kg) and Manoj Kumar (64kg) already out of contention, Vikas's loss on Monday drew the curtains on India’s boxing challenge at the Games.