China continued to put up dominating performances in the pool, this time taking gold in women's 10 metre synchronized diving on Tuesday. 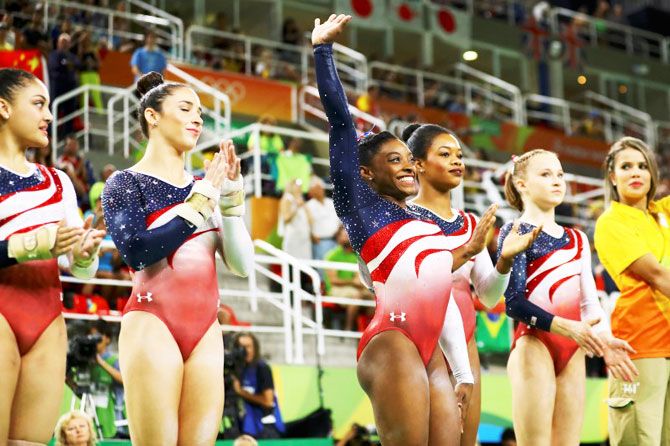 Simone Biles and her American teammates proved that they are an untouchable force in gymnastics as they blew away the opposition to win the women's team title at the Olympics on Tuesday.

There were a few wobbles here and there, even for Biles, but those imperfections did not stop them winning the title by a massive 8.209 points over second placed Russia. China were third.

Since the open-ended scoring system was introduced to the sport in 2006, it was the biggest winning margin of any global championships.

They put in such a commanding performance that Biles needed to overhaul a target of just 7.591 with her final floor performance to secure her first Olympic medal.

A score of 15.800 left her and her team mates, Gabby Douglas, Aly Raisman, Laurie Hernandez and Madison Kocian, whooping with joy. It was a second successive team title for the US. 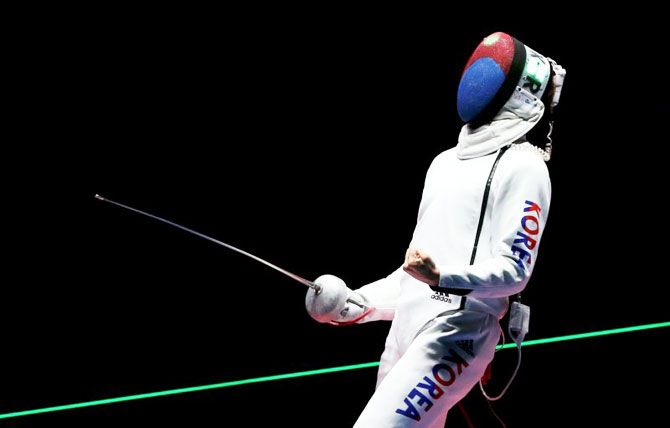 South Korean fencer Park Sang-young came from behind in the final seconds to snatch gold from a man twice his age, upsetting 41-year-old Hungarian Geza Imre to become the youngest Olympic epee champion in over a century.

The silver finish for Imre, who took bronze in 1996 before Park was a year old, made the Hungarian the oldest Olympic fencer to take an individual medal since 1952. 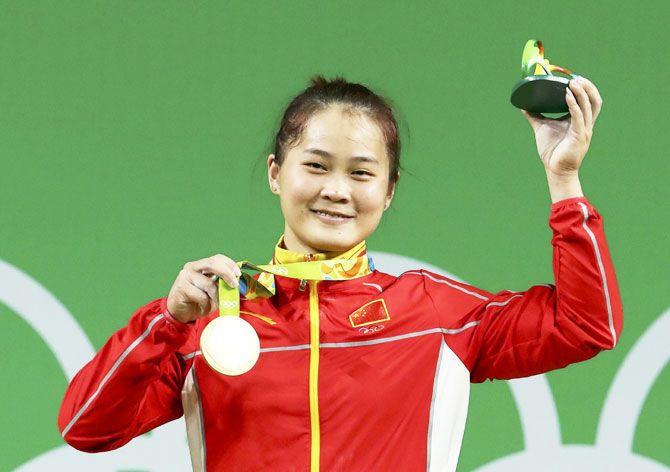 China’s Deng Wei won the women's 63kg gold medal on her Olympic debut and broke the world record held by Taiwan's Lin Tzu-chi, who was withdrawn just hours before the event started.

The International Weightlifting Federation declined to comment on the reasons for Lin's withdrawal but a source close to the situation said the Taiwanese lifter failed a dope test.

Lin, who set the world record total of 261kg in winning the 2014 Asian title, was withdrawn by Taiwan's Olympic committee and then lost her world record when Deng Wei managed 262kg.

Lin, 28, is the third lifter to test positive in the past five days following Antonis Martasidis of Cyprus (85kg) and Tomasz Zielinski of Poland (94kg) who were sent home.

Deng Wei was the easiest winner of the week, finishing with a lift to spare. She beat her own clean & jerk world record by 1kg with 147kg on her second attempt to reach 262kg.

Deng finished 14kg clear of Choe Hyo Sim, the North Korean who has stood below her on the podium at the past two International Weightlifting Federation world championships. It was the widest winning margin of the six events to date.

The bronze was won by Karina Goricheva, 23, from Kazakhstan. 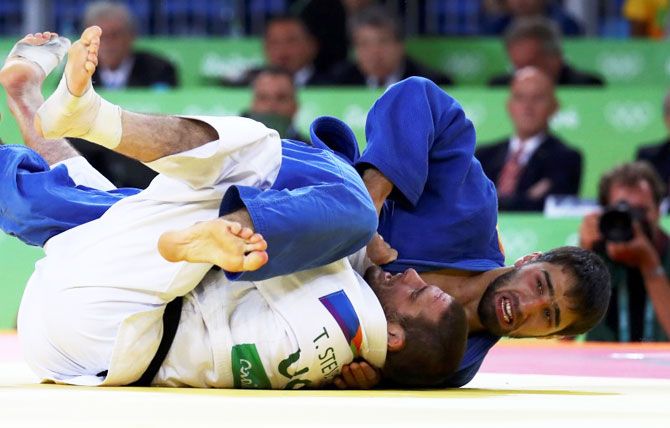 IMAGE: USA's Travis Stevens and Russia's Khasan Khalmurzaev are locked in as they compete in the men's 81 kg Judo final on Tuesday. Photograph: Kai Pfaffenbach/Reuters/strong>

Khasan Khalmurzaev earned Russia's second judo gold medal of the Rio Games on Tuesday, beating Travis Stevens of the United States for the top prize in the men's -81kg category.

Ending his campaign with a bang, the Russian won his final two matches by ippon -- judo's equivalent of a knockout -- over Sergiu Toma of the United Arab Emirates in the semi-final and then Stevens.

Stevens had been vying to become the first man from the United States to win gold in judo.

Despite settling for silver, it was third time lucky for the American after he had come home without a medal from the Beijing and London Olympics. China's Chen Ruolin and Liu Huixia claimed gold in the women's synchronized 10 metre platform diving event at the Rio Games on Tuesday, with Malaysia and Canada respectively taking the silver and bronze medals as the venue's pool turned a bright green hue.

The triumph also makes Chen a five-time Olympic gold medallist, and puts her on a par with compatriot Wu Minxia for the title of most Olympic diving gold medals in a career. 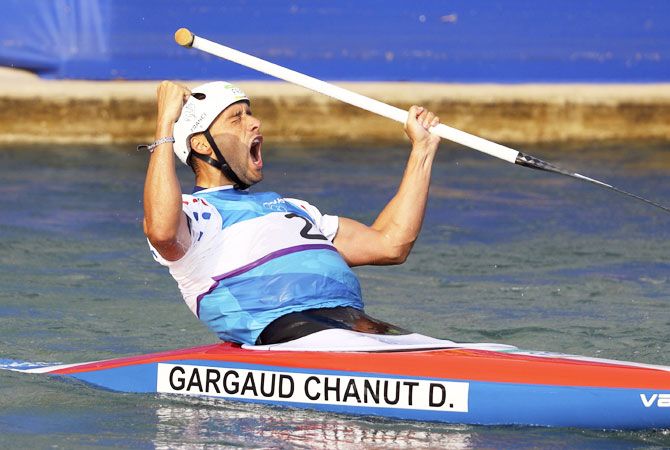 Gargaud Chanut smoothly negotiated the 24 gates along the churning 242m whitewater course to finish 0.85 seconds ahead of Slovakia's Matej Benus. Greek shooter Anna Korakaki took the gold medal in the women's 25 metre pistol event on Tuesday, two days after she won a bronze and became the first woman to win a medal in shooting for Greece.

The 20-year-old Korakaki prevailed over Monika Karsch, a 33-year-old from Germany, who mounted a late but ultimately unsuccessful rally after Korakaki established a strong lead. The two are first-time Olympians.

Heidi Diethelm Gerber of Switzerland won the bronze medal, beating world No. 1 and world champion Zhang Jingjing of China. The Swiss shooter is 47 and took up the sport at 33. 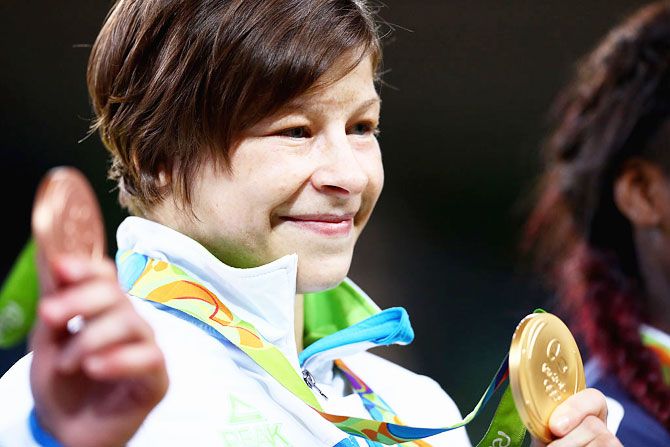 IMAGE: Gold medalist Tina Trstenjak of Slovenia poses on the podium during the medal ceremony for the Women's -63kg on Day 4 of the Rio 2016 Olympic Games at the Carioca Arena 2 in Rio de Janeiro on Tuesday. Photograph: Ryan Pierse/Getty Images France won its first gold medal of the Rio Games in eventing on Tuesday in a dramatic show jumping final, rising two places from the cross country phase after riders from Australia and New Zealand knocked rails down.

Germany had to settle for silver as their Olympics' streak of two team titles ended. France's Astier Nicolas took silver with one rail down and Phillip Dutton of the United States won bronze.