Rio Olympics: Germany cruise into semis with 4-0 win over Portugal

Rampant Germany hammered Portugal 4-0, with four players sharing the goals, to progress to the semi-finals of the Rio Games football tournament on Saturday. 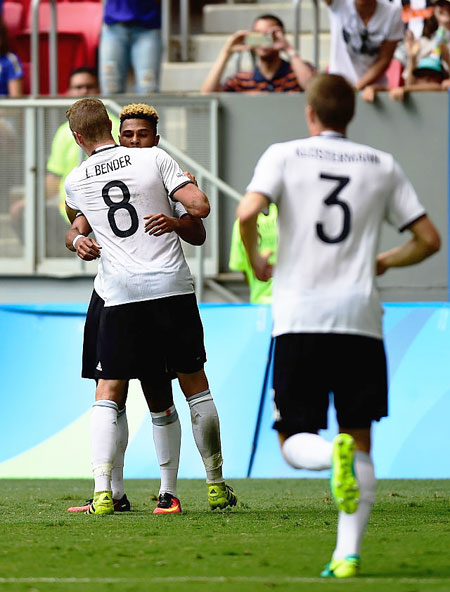 Striker Serge Gnabry scored the opener for the Germans with a lovely angled shot seconds before half time and Matthias Ginter added a second with a commanding header from a corner 12 minutes into the second half.

Davie Selke got a third in the 75th minute with a goal that was almost identical to the first, then substitute Philipp Max put the icing on the cake when he ended a sweeping move with a lovely finish into the top corner three minutes from time.

The result was payback for Portugal's 5-0 hammering of Germany in the semi-finals of the European under-21 championship last year.

Germany will face either Nigeria or Denmark, who were meeting later on Saturday, in their semi-final. South Korea take on Honduras while hosts and three-times runners-up Brazil play Colombia in later matches, also on Saturday.

The Olympic tournament is restricted to under-23 teams with three overage players allowed per side. Germany have never won it as a unified nation although communist East Germany won gold in 1976.

Image: Germany's Serge Gnabry #17 celebrates with teammate Lars Bender #8 after scoring against Portugal in the first half during the Men's Football quarter-final match on Day 8 of the Rio 2016 Olympic Games at Mane Garrincha Stadium in Brasilia on Saturday

© Copyright 2020 Reuters Limited. All rights reserved. Republication or redistribution of Reuters content, including by framing or similar means, is expressly prohibited without the prior written consent of Reuters. Reuters shall not be liable for any errors or delays in the content, or for any actions taken in reliance thereon.
Related News: East Germany, Serge Gnabry, Portugal, Matthias Ginter, Davie Selke
SHARE THIS STORYCOMMENT
Print this article