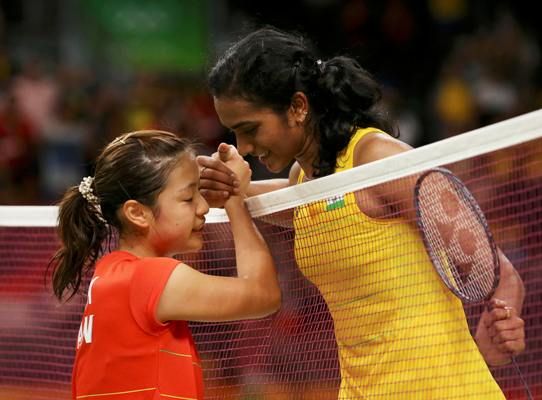 Pusarla Sindhu sent Indian fans into a frenzy by blasting through Japan's Nozomi Okuhara to reach the gold medal decider for the women's singles at the Olympic badminton on Thursday.

With a huge contingent of home fans roaring "Go India, go!", the 21-year-old Hyderabadi gradually wore down sixth-ranked Okuhara before charging to an emphatic 21-19 21-10 victory at the Riocentro.

A nation that has never punched its weight at the Olympics, India has had a paltry return at Rio, with only a solitary bronze won by freestyle wrestler Sakshi Malik on Wednesday. Sindhu must deal with the expectations of a billion people when she heads into a tough decider against the twice world champion Marin.

"It's not like pressure but it is a big moment for me playing in the final, so it's just I have to do my best and play my 100 percent game and that's all I feel," she told reporters, having secured the country's second badminton medal following Saina Nehwal's bronze in the same event in London.

"Of course, (Marin) is a very tough opponent.

"It's not going to be easy tomorrow because it's another big final. And she's really playing well.

"She played brilliantly against Li Xuerui today. So I suggest that tomorrow, who plays well and gives their best is the winner." Marin will also have been impressed by the ninth-ranked Indian, who has carried Team India's hopes since their top singles player Nehwal bowed out of Rio with an injury-hampered loss.

Growing in confidence as the match wore on, Sindhu won 10 consecutive points to close out the match with a barrage of overhead smashes.

She will meet another player with impressive firepower in Marin, who never allowed Li to settle into a rhythm.

"I don't know what will happen tomorrow. I will give everything I have on the court to get the gold medal that I want so badly," said the 23-year-old Andalucian.

"I am excited because I have trained so hard, but it was worth it."