'He [Perez] only ever looked at me as a business relationship. I know it. What he told me was never from the heart.' 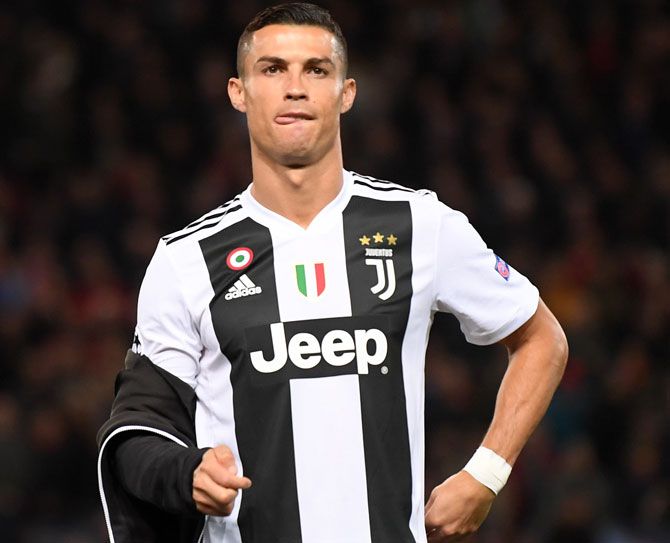 IMAGE: Cristiano Ronaldo has helped Juventus to an unbeaten start in Serie A this season, netting seven goals in ten appearances for the Italian Champions. Photograph: Laurence Griffiths/Getty Images

Cristiano Ronaldo says he decided to quit Real Madrid this summer because the Spanish club's president, Florentino Perez, only ever saw him as a means of making money.

"He [Perez] only ever looked at me as a business relationship. I know it. What he told me was never from the heart," the Portuguese forward told France Football magazine.

The 33-year-old Ronaldo signed for Italy's Juventus from Real in July for 100 million euros and has helped his new club to an unbeaten start in Serie A this season, netting seven goals in ten appearances for the Italian Champions.

"In the first four or five years (at Real) I had the feeling of being 'Cristiano Ronaldo'. Less so afterwards. The president looked at me through eyes that didn't want to say the same thing, as if I was no longer indispensable to them," he said.

"That's what made me think about leaving. Sometimes I'd look at the news, where they were saying I was asking to leave. There was a bit of that, but the truth is that I always had the impression that the president would not hold me back."

Real have struggled to come to terms with his departure. Opting not to replace him in the transfer market has backfired and the European champions are currently ninth in La Liga with new coach Julen Lopetegui set to be axed on Monday.

Previous incumbent Zinedine Zidane had warned the club major changes were needed, however pre-emptively left Real in what is now looking to have been a smart move.

The Portuguese international said he is satisfied with his decision to leave given how things have transpired at the Bernabeu this season.

"My decision to leave was not based on Zidane's," Ronaldo said.

"That being said, it's one of those little things that made me feel a bit better about what I thought about the situation at the club." He says he feels vindicated by the decision to join a club where he feels loved.

"If it had all been about money, I'd have moved to China, where I would have earned five times as much.

"I did not come to Juve for the money. I earned the same in Madrid, if not more, but the difference is at Juve they really wanted me. They told me that and made it clear."