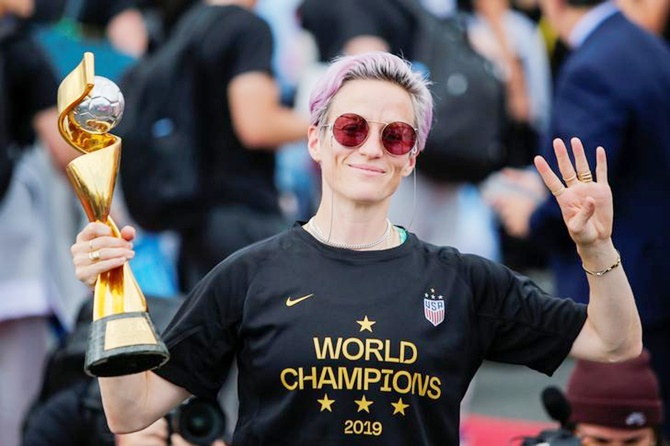 IMAGE: Megan Rapinoe gestures the number 4 with her fingers as she holds the trophy for the FIFA Women's World Cup while the United States team arrives at the Newark International Airport, in Newark, New Jersey, on July 8. Photograph: Eduardo Munoz/Reuters

President Donald Trump needs to do better in caring for every single American, the triumphant US women's soccer captain Megan Rapinoe  said, as she hit back at him after he lectured her to win the World Cup title before she talked.

The 34-year-old forward has skyrocketed to national prominence for leading her team's win the World Cup on Sunday and also championing the lawsuit filed by 28 US Women's National Team players demanding pay equal to the men's squad.

"You have an incredible responsibility as the chief of this country to take care of every single person, and you need to do better for everyone," Rapinoe, who was awarded the Golden Boot and Golden Ball and who scored one of the side's winning goals in the final against the Netherlands, told CNN in an interview aired on Tuesday.

Rapinoe, who does not sing during the playing of the national anthem of the United States drew President Trump's ire.

Prior to the World Cup in Lyon, France, Rapinoe had asserted that she would not be going to the White House if the women's team won the World Cup. Her comments were made in January but became public only last month.

After the publication of her offensive remarks, President Trump shot back on Twitter, advising that Rapinoe "should WIN first before she talks!" and "Finish the job!"

"We haven't yet invited Megan or the team, but I am now inviting the TEAM, win or lose," Trump added. "Megan should never disrespect our Country, the White House, or our Flag, especially since so much has been done for her & the team. Be proud of the Flag that you wear."

During ESPN's interview with Rapinoe and her teammate, Alex Morgan, the recent back-and-forth with President Trump was discussed.

"I think we know who won that," Morgan said, when asked to put the political backdrop of the team's fourth title in perspective.

"I held up my end of the bargain on that one," Rapinoe asserted.

When asked about her controversial comments during the CNN interview, Rapinoe expressed regret for swearing so much but stood by her decision not to go to the White House.

"I don't think anyone on the team has any interest in lending the platform that we've worked so hard to build, and the things that we fight for, and the way that we live our life -- I don't think that we want that to be co-opted or corrupted by this administration," Rapinoe said.

She said that allowing the White House to "put us on display" didn't "make sense for us at all," adding that "there are so many other people that I would rather talk to and have meaningful conversations that could really affect change in Washington than going to the White House."

But Rapinoe said she would be happy to accept invitations to visit the Capitol from House Speaker Nancy Pelosi, Senate Minority Leader Charles Schumer and others.