In the wake of the International Olympic Committee's threat to ban India from the Olympic movement, Randhir Singh, who withdrew from the race for the post of Indian Olympic Association president, accused acting president V K Malhotra of creating a mess that would ultimately bring shame to the nation.

Randhir, who is an IOC member and secretary-general of both the Olympic Council of Asia and IOA, also held the Abhyay Singh Chautala-led faction responsible for dragging Indian sport into this position, and said an IOC sanction is inevitable if elections are held under the government sports code on December 5.

"It seems they (Chautala faction) are not concerned (about IOC's threat of a possible suspension). There is no hurry to hold the elections. There is a court hearing on December 17th.

"The government is also willing to solve the issue. Let the IOC, government and IOA sit together and sort out the problem," Randhir said.

"The government is willing to sit with the IOA and IOC across the table to sort out the problem but are they interested? Not, not at all. Why are they in such a hurry to hold the elections? he questioned.

Randhir's withdrawal has left the field open for Chautala to be elected unopposed for the IOA president's post in the December 5 elections.

Randhir lambasted Chautala for indulging in dirty politics ahead of the IOA polls and said the INLD leader and his backers are least bothered about Indian sports and sportspersons in the wake of the IOC's threat.

"I would like to know from the great leaders of IOA are they concerned (about Indian athletes)? I don't think so. They are only concerned about their own position.

"We must understand that the high court said that elections must be held under the Sports Code and IOA charter. There is a case hearing on the 17th December so we could have waited for it.

"I have explained to each and everyone in IOA about IOC's position. Today only, I have explained it to Malhotra that IOC is very serious. I have told him to please smell the coffee and cancel the election," Randhir insisted.

"The election can be held a month or two later. It is not the end of the world if it is delayed for a while," he said.

Randhir also took a dig at the Chautala-faction for nominating tainted sports administrator Lalit Bhanot for the post of secretary-general.

He said by doing so, the Chautala side has directly violated IOC Ethics Commission's recommendations, which clearly stated that tainted officials like Suresh Kalmadi, Bhanot and V K Verma, who all were jailed in connection with the Commonwealth Games corruption scam, cannot be part of the Olympic movement.

"The IOA ethics committee has mentioned clearly that these people shouldn't be part of the Olympic movement," Randhir said.

Randhir said he withdrew his nomination because being an IOC member he cannot go against the institution he belongs to.

"I cannot go against the IOC Charter. Precisely this is the reason why I withdrew my nomination," he added. 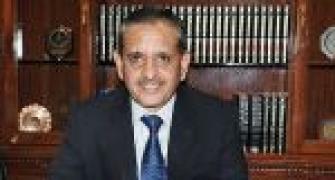