Ramkumar in quarter-finals of US Challenger 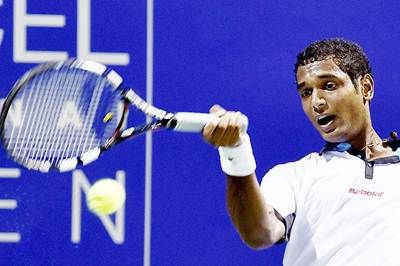 Ramkumar Ramanathan rallied past New Zealand’s Jose Statham to enter the quarter-finals of the US $50,000 ATP Challenger hardcourt tournament, in Binghamton, United States.

The 21-year-old later expressed relief on winning the tie-breaker after losing quite a few in the last few weeks.

It was the first tie-breaker Ramkumar won, having lost five in a row since the Wimbledon qualifiers.

"It was a close match. The guy had great returns and passing shots. I had to go for my serve and shots. In the third set I broke him but was broken back. I was serving for the match at 6-5 but could not seal it. It was a good tie-breaker to win after losing a few in the past few months. I am looking forward to playing the next match," said Ramkumar.

He took a while to settle on the hardcourt, having played on grass last week, and found his rhythm from the second set.

After making it one-set apiece, Ramkumar made a fiery start to the deciding set by sending down four consecutive aces to hold at love.

He then broke Statham, ranked as low as 472, in the third game. Though he served a double-fault and faced a break-point in the fourth, he wriggled out with an ace to lead 3-1.

The New Zealander, however, broke back in the sixth game to level it 3-3 and eventually it all boiled down to the tie-breaker.

Ramkumar will meet British giant-killer Brydan Klein, who knocked out top seed Quentin Halys in the opening round.

They lost 6-7(10), 2-6 to unseeded pair of Liam Broady of Great Britain and Brazil’s Guilherme Clezar.