Terming the National Sports Development Bill a "landmark initiative" aimed at "stemming the rot" in Indian sports, legendary athlete PT Usha has urged Prime Minister Manmohan Singh to ensure that it is cleared by the Cabinet and passed by the Parliament.

Usha said that the revised Bill, if it becomes an Act, will herald "a new era" in sports with its provisions.

"The National Sports Development Bill and its revised version proposed by Minister of Youth Affairs and Sports is a landmark initiative and has the potential of streamlining National Sports Federations, including Indian Olympic Association. It is a well-meaning legislation aimed at making sports administration responsible, accountable and transparent in its operation," Usha said. 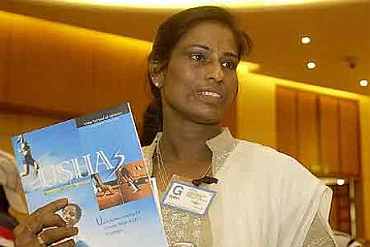 "We should consider it as our national duty to back the Government in this unique hour when the Sports Bill would become an Act to stem the rot.

"I would urge the honourable Prime Minister and his members of the Cabinet kindly to steer the Bill and get it approved and passed by the Parliament with the same zeal as the government had shown during the Nuclear Energy Bill thus paving the way for a new vibrant era in Indian sports when Indian athletes would achieve their untapped potential," said Usha.

Usha, who missed an Olympic 400m hurdles bronze by the hundredth of a second in the 1984 Los Angeles Games, said the revised Bill would give more autonomy to the NSFs.

She strongly supported the contentious provisions of age and tenure limitation of office bearers, bringing all NSFs under the RTI ambit, besides those relating to free and fair election, prevention of doping, age fraud, sexual harassment and granting of 25 per cent representation of athletes in the executive bodies of NSFs with voting rights.

"As I understand, this Bill once enacted, will grant much more autonomy to NSFs than now prevalent. By removing the current provision of yearly recognition of NSF by the Sports Ministry, it will ensure that government and bureaucratic interference is done away with," Usha said.

"Moreover, the Bill also addresses the issue of political interference in administration of federations, which have marred Indian Sports till now," she added.

She lamented the dismal performance of Indian sportspersons in the international arena over the years and said the Sports Bill could be the beginning of a new phase of success.

"India's dismal performance in the field of international sports is quite intriguing and pathetic. We are proud that few of us have won laurels for our great country. Words can't describe our emotions and feelings when we heard our National Anthem being played and saw our Tricolour hoisted at the international venues," she said.

Usha expressed happiness that many a sportspersons cutting across various disciplines have supported the Bill.

"All of us, sports lovers, enthusiasts, the media and every member of the sports family, as true patriotic representatives of Indian Sports, have come together for the first time to back this historic, bold step taken by the Sports Ministry. All ours' personal intervention towards successful passage of this landmark legislation shall be remembered by posterity and generations to come," she said.