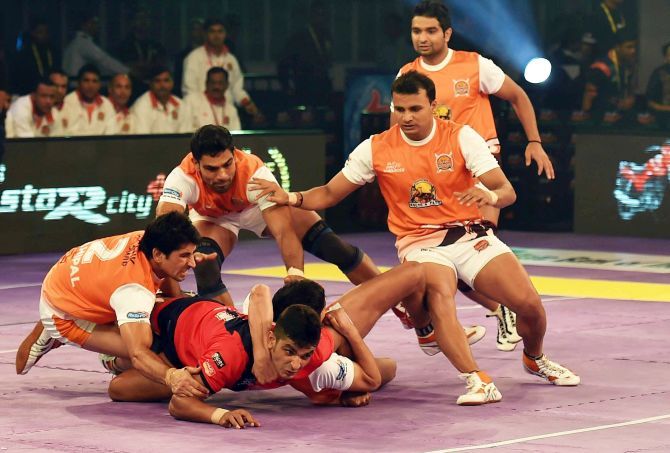 Continuing their winning streak, U Mumba downed hosts Bengal Warriors 29-25 for their fifth win on the trot, while Dabang Delhi pipped Puneri Paltan by one point to open their tally in the Pro Kabaddi League at the Netaji Indoor Stadium in Kolkata.

Trailing 9-11 at the break, Bengal Warriors bounced back around the half hour mark to gain a 15-14 to the cheers of the packed home crowd. But, Mumbai's superb tackle especially by the duo of captain Anup Kumar and Jeeva Kumar helped them script a superb comeback en route to a 29-25 win.

The duo were also adjudged Best Raider and Defender respectively.

Mumbai earned three points after a review to gain a 25-23 lead and did not look back.

Standing as captain in absence of Dinesh Kumar, Nilesh Shinde led from the front with one super tackle and was brilliantly aided by Sachin Khambe but that was not enough.

The Mumbai franchise now have 25 points to consolidate their lead at the top and brighten their semifinal hopes.

Bengal Warriors, on the other hand, suffered their second successive defeat and remained on fourth place as their task to make the semifinals has become all the more difficult.

Meanwhile, in the earlier match of the day, Dabang Delhi overcame a stiff late resistance from Puneri Paltan to open their account with a narrow 38-37 win.

Bottom placed Delhi jumped to fifth with five points, while Pune slipped to the bottom of the table with two points.

Wazir, who was adjudged Best Raider, made it 33-33 before Pune gained a slender 37-35 lead with two minutes to go.

Just when it mattered the most, Adake delivered yet again with another fine raid to make it 37-37 before Delhi's solid defence stamped their authority by pinning down Pune's best raider and captain Singh en route to a thrilling win.

In a battle between the last two teams in the table, Delhi were trailing 1-4 but they turned it around in style with a fifth minute super raid by Chaudary who pinned down four Pune defenders to hand a 5-4 lead.

Pune's attack banked heavily on their skipper Wazir but that was not enough to make a comeback as their poor defence meant that Delhi raced to a six-point lead in no time.

Delhi went for the jugular once again and this time Adake knocked out three Pune defenders for a second super raid en route to the commanding lead midway into the contest.