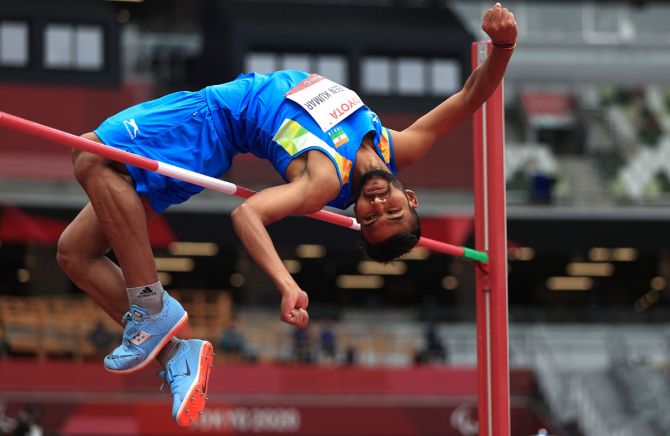 IMAGE: Praveen Kumar competes in the men's high jump - T64 final on Day 10 of the Tokyo 2020 Paralympic Games at the Olympic Stadium in Tokyo, on Friday. Photograph: Buda Mendes/Getty Images

A congenital impairment notwithstanding, Tokyo Paralympics silver medallist Praveen Kumar was such a sports freak in his school days that he googled about para athletics and how to participate in the paralympics.

18-year-old Praveen, a son of a poor farmer in a village near Uttar Pradesh’s Jewar in Gautam Buddha Nagar district, clinched silver medal in the men's high jump T64/T44 event of the Tokyo Paralympics on Friday, with a new Asian record of 2.07m.

"My school life was mostly about sports. But at that time, I did not know I will reach at this level one day. I was playing volleyball initially in school, but then slowly came to know of para athletics and took up high jump," Praveen said after his event.

"I came to know about Paralympics and how to take part in it after searching on google," the high jumper, whose congenital impairment affects the bones that connect his hip to his left leg, said during a virtual press conference organised by Eurosport and Paralympic Committee of India.

Explaining how he came to rise to this level, Praveen said, "I took part in a district level competition where I met Ashok Saini sir who gave me phone number of Satyapal sir (his current coach).

"I contacted (Satyapal) Sir and then he found out in which classification I will compete. He identified me and said he will take me. This was 2018," said Praveen who is a B.A. second year student in Motilal Nehru College in Delhi.

Praveen, who is just in his second year in the international circuit, said initially even the fellow students and teachers of his school wondered how he will do well in his sport but they later began supporting him.

"I won a silver in junior para athletics world championships in 2019 and won gold in the para athletics Grand Prix earlier this year (in Dubai), so people started supporting me." 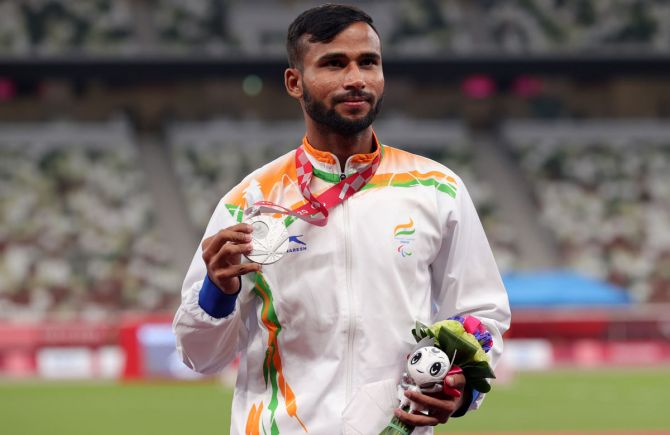 He finished fourth in the Para Athletics (senior) World Championships in 2019.

Talking about Friday's competition, he said, "I was a bit low in confidence when I cleared 1.97m in my second attempt but I regained confidence after jumping 2.01m. I told myself I will give my best whatever it takes, whether rain or not.

"There was pressure while trying to jump 2.10m. In the final attempt, I just thought of doing my best and it was a very good attempt but there was some problems in my landing and so I could not clear it," said Praveen, who was congratulated by Prime Minister Narendra Modi on phone.

His coach Satyapal said he initially had some reservation about his short stature but found that Praveen has very strong muscles on his right leg.

"His left leg is the impaired one but his right leg has very strong muscles. So, despite his short stature I decided to train him. Height (of athlete) is very important in high jump," Satyapal told PTI about his ward who is around 5ft 5 inches tall.

"He came to me with his father in 2018 and I found out his talent. He is from a very poor family but he is very sincere and dedicated."

Praveen was also COVID-19 positive in April and he could not train properly this year.

"Due to lock down, he could not train properly. High jumpers need mattress to train but he could do that as the stadiums were closed. Moreover, he contracted COVID-19 this year," Satyapal, who trains Praveen at Delhi's Jawaharlal Nehru Stadium, said.

Satyapal said Praveen is a sure shot gold medal candidate at the Asian Para Games next year in Hangzhou in China.

"He started competing in international events only two years back and now he has won a silver in Paralympics. He is just 18 and he will be the country's top Paralympian in future.

"Our target will be to win the Asian Para Games next year and gold in 2014 Paris Paralympics with world record."

T44 classification is for athletes with a leg deficiency, leg length difference, impaired muscle power or impaired passive range of movement in the legs.