M A Prajusha defended her title in triple jump on the concluding day as her state Kerala emerged overall winners in the National Inter-State Senior Athletics Championships in Hyderabad on Monday.

Prajusha, who won a silver in long jump in the 2010 Delhi Commonwealth Games, won the triple jump event with an effort of 13.66m at the G M C Balayogi Staidum at Gachibowli here.

She barely missed the meet mark of 13.68m, which stands in her state-mate Mayookha Johny's name since 2010.

Shraddha Ghule of Maharashtra, the 2008 Commonwealth Youth Games champion, took the silver with a 13.18m jump while Amitha Baby of Kerala won the bronze in 12.72m.

The championships, the last domestic qualification event for next month's Olympics, lacked the fireworks with only high jumper Sahana Kumari of Karnataka making the London Game grade with here gold-winning effort of 1.92m.

Harwant, the 2010 Commonwealth silver medallist, could manage only 55.92m in the discus throw and hence could not join her teammates Krishna Poonia and Seema Antil in the London Olympics-bound squad.

Rajasthan's Shakti Singh recorded a personal best of 18.25m to take the men's shot put gold while long distance runner Kheta Ram brought another gold for the state in the 10,000m. clocking 29:49.71.

Metric miler Jhuma Khatun, who also represented Jharkhand, engaged in a keen tussle with Kerala girl S R Bindu in women's 1500m before winning gold in a thrilling finish on the home stretch. She clocked 4:28.31 to Bindu's 4:28.53.

Delhi's Nitin outsprinted Tamil Nadu's Manikanda Arumugam in men's 200m with a time of 21.44 secs while Haryana's Manisha grab the gold in women's race in 24.26s. Andhra Pradesh's Satti Geetha who was trying to emulate her sprint double at the Patiala edition two years ago finished second in Monday's race with a time of 24.33 secs.

As expected, Kerala retained the overall title with a whooping 192 points while Uttar Pradesh finished a distant second in 82 points. 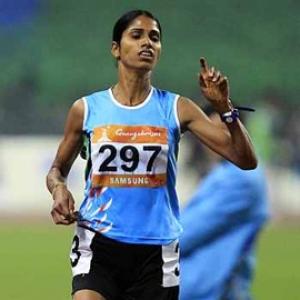