In-form Prajnesh Gunneswaran inched closer to his maiden Grand Slam appearance with another straight-sets win but Ankita Raina and Ramkumar Ramanathan were ousted from the Australian Open Qualifiers after suffering narrow defeats, in Sydney on Thursday.

Prajnesh, seeded sixth, got the better of Spain's Enrique Lopez Perez 6-3, 6-3 in the men's singles second round.

"I played a better match than yesterday and remained solid throughout. I broke three times and there were not too many games where my serve was in danger. I played good mentally as well," Prajnesh told PTI.

"I did the right things, attacked when I got chances. Looking forward to the final round tomorrow," he added.

The World No 112 will next take on Japan's Yosuke Watanaki, ranked 192 in the world.

If Prajnesh wins Friday’s match, it will be his first main draw competition at a Grand  Slam. He unfortunately missed out on playing at 2018 French Open when as a lucky loser he made the main draw but since he had left Paris and entered a Challenger tournament, he missed out on the chance.

Injured Yuki Bhambri had played in all four Grand Slam main draws in 2018.

"I served well in the match and had a break point at 3-3 in the final set but missed the backhand down the line. It was just a few inches wide. You have to take those chances," rued Ramkumar.

"I tried to play attacking tennis but I felt I slowed down a bit in the second set. I was aggressive again in the third. But the girl (opponent) was serving big today which was the deciding factor," said Raina. 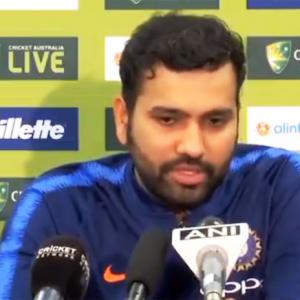