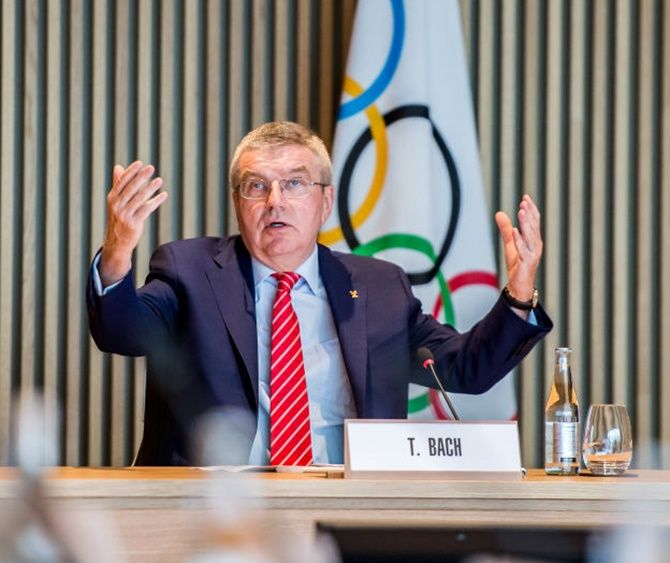 International Olympic Committee chief Thomas Bach said on Tuesday that he and Japanese Prime Minister Shinzo Abe did not discuss the cost of postponing the Tokyo 2020 Olympic Games to 2021 due to the coronavirus as it is a matter of saving lives.

The July 24-August 9 event will be rescheduled for the summer of 2021 at the latest, as proof of victory over the coronavirus, the IOC and Tokyo 2020 organisers said in a joint statement, after an agreement between Bach and Abe.

"This is about protecting lives," Bach told a conference call after his call with Abe triggered the first postponement of the Olympic Games in their 124-year history.

The precise dates for the new Games have not yet been determined, Bach said. "About two hours after my phone call I cannot give you a definite answer.

"These are the reasons why we had decided we need at least four weeks to assess all these questions... These are not the only ones," Bach added on a phone call with journalists.

The IOC, who had long insisted the Games would go ahead as planned, said on Sunday it was considering the option of postponement with a four-week consultation period.

But mounting opposition from athletes and teams over participating in Tokyo this year due to huge problems preparing themselves piled more pressure on the IOC.

Bach said alarming figures about the spread of the virus in recent days had left little choice in the matter.

"We agreed given these circumstances that the Games must be rescheduled to a later date beyond 2020 but not later than summer 2021," he said.

The IOC and organisers are now faced with a massive undertaking of rescheduling the Games that has a multitude of moving parts with 33 sports involved and an additional price tag to the $12 billion already spent by Tokyo for the Olympics.

Bach said the IOC's coordination commission had already started work on this project and it would work towards determining new dates.

The coronavirus outbreak has raged around the world since early this year, infecting nearly 380,000 people and wrecking sports events from the European soccer championships to Formula One motor racing.

Despite their disappointment and the logistical headaches and financial losses involved, a poll indicated that about 70% of Japanese agreed with the delay.