Denmark midfielder Christian Eriksen collapsed during their Euro 2020 Group B opener against Finland on Saturday.

UEFA said Eriksen, who was given CPR by medics on the pitch, was transferred to hospital where the 29-year-old was stabilised, with officials saying he was conscious.

Following is a list of players who have collapsed on the pitch during a match.

The Bolton Wanderers midfielder collapsed on the pitch in an FA Cup match in 2012 due to a cardiac arrest and was technically "dead" for 78 minutes before he was revived. The former England under-21 midfielder had to retire soon after at the age of 24.

The French striker has collapsed several times on the pitch due to a medical condition which causes him to faint. He has collapsed playing for Swansea City, Galatasaray and Al-Hilal.

The Cameroon midfielder collapsed during a Confederations Cup match in 2003. Medical staff attempted to resuscitate the 28-year-old on the pitch before taking him off on a stretcher.

However, they failed in their attempts to restart his heart and he was pronounced dead.

The Sevilla midfielder collapsed while jogging back in the first game of the 2007-08 La Liga season against Getafe and, though he walked off the pitch after being helped by medical staff, he collapsed again in the dressing room.

Puerta, a Spain international, was rushed to hospital, where he died three days later of "multiple organ failure" due to a cardiac arrest at the age of 22.

The Hungary striker was playing for Portuguese side Benfica against Vitoria Guimaraes in January 2004 when he keeled over in pain before falling backwards onto the pitch after a heart attack.

Medics attempted to resuscitate the unconscious 24-year-old before he was taken off on a stretcher and rushed to hospital. Doctors tried to revive him for nearly 90 minutes before he was pronounced dead.

Tragedy struck the footballing world when Livorno's 25-year-old Piermario Morosini died on the field during their Serie B match against Pescara in April 2012. Morosini fell to the ground with no one around him in the 31st minute. He got up looking confused and then collapsed again as medics and then an ambulance rushed on to the field.

© Copyright 2021 Reuters Limited. All rights reserved. Republication or redistribution of Reuters content, including by framing or similar means, is expressly prohibited without the prior written consent of Reuters. Reuters shall not be liable for any errors or delays in the content, or for any actions taken in reliance thereon.
Related News: Piermario Morosini, Christian Eriksen, UEFA, Marc-Vivien Foe, Bafetimbi Gomes
COMMENT
Print this article 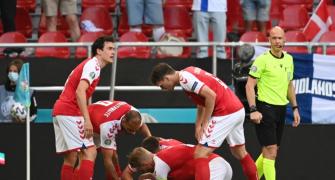 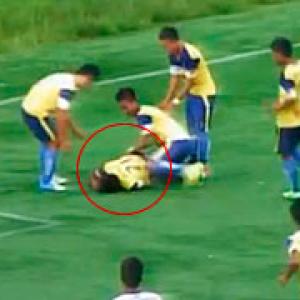