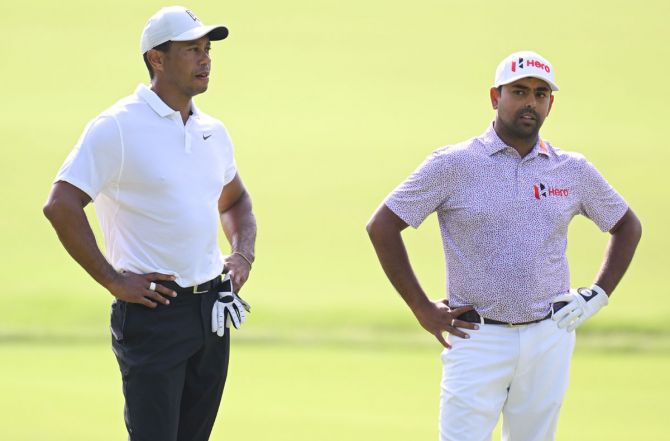 IMAGE: Tiger Woods speaks to Anirban Lahiri on the third hole during a practice round prior to the start of the 2022 PGA Championship at Southern Hills Country Club in Tulsa, Oklahoma, on Wednesday. Photographs: Ross Kinnaird/Getty Images

India's golfer Anirban Lahiri's week kept getting better even before he reached the tee in the opening round of PGA Championship as he got to practice alongside the legendary Tiger Woods in Tulsa, Oklahoma, on Wednesday.

Lahiri, who is making a Major appearance after nearly three years, made a late decision to turn up at Southern Hills, while waiting for the arrival of his second baby. He then arrived at Southern Hills on Tuesday and when he got to the course for a practice round on Wednesday, he found Woods without anyone else.

The 15-time Major champion asked the Indian if they could play together. Lahiri could hardly believe this stroke of luck.

"I headed to the first tee and there were a few players there, and me and Tiger were standing around. There was some confusion as to who was going and it was then just me and Tiger, and he asked me (to play together) and why would I ever say no to that invitation! It was just random, it was serendipity," Lahiri said. Woods played nine holes before he left and then Lahiri got to play nine holes with Bryson DeChambeau, who later withdrew as his hand is still not okay after a surgery.

"I had a really fun day, an interesting day. It was quite the surprise," said Lahiri.

"Got in late last night and honestly, I've not gotten much sleep the last few days. I was just going about my work and I know he normally practices in the morning because every time Tiger is at a major, the crowds let you know where he's at," said Lahiri. 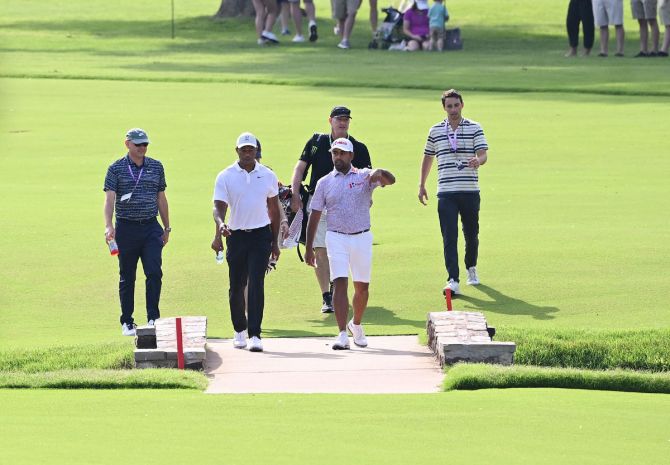 Lahiri has played once previously with Woods over three holes when the American superstar jetted into New Delhi in 2014 for a flying visit. But since competing on the PGA Tour in 2016, the Indian has had the chance to know Woods over time.

"Every time I see him, we say hello and we chat. I actually haven't played much golf with him, so to actually go out and play nine holes, kind of a chill day was a lot of fun. He was super relaxed and very friendly, and we talked a lot about our common interests including Arjun (Atwal), Jeev (Milkha Singh), and Hero (MotoCorp).

"He obviously talked about the changes to Southern Hills since he was last here and it was good to get insights on how he sees it on some of the holes," said Lahiri.

Lahiri had come close to pulling out of the event as his wife, Ipsa, was expecting their second baby. He had made up his mind to pull out if the baby did not come till Tuesday.

But his son Avyaan got him out of the dilemma by arriving ahead of time to join the family. Lahiri has an elder daughter, too.

Once all was fine, it was time to make some last-minute preparations. Then came the totally unexpected chance to play with Woods, who had won at Southern Hills in 2007 for one of his four PGA Championship wins.

Woods left after nine holes and Lahiri was then joined by long-hitting DeChambeau on the back nine.

Later, Chambeau withdrew from the tournament as he is still recovering from a hand injury.

"He (DeChambeau) was swinging at 60% and still flying it 320 yards, it's just incredible what he's managed to do with speed and distance. It was really shocking," said Lahiri.

"I was joking with my caddie that we had a day where we kind of did it all. We show up and then play with Tiger and the back nine with Bryson. All the time, I was trying to soak up what the golf course is all about." 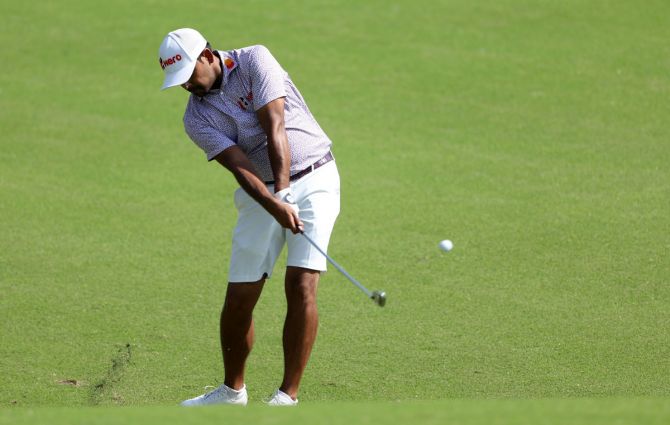 Lahiri, who finished tied fifth in the 2015 PGA Championship, is enjoying a good run of form following his runner-up finish at THE PLAYERS Championship, which is the PGA TOUR's flagship tournament.

Since then, he has finished T13, T66, T15 and T6 and risen to 47th place on the FedExCup points list and 12th on the International Team rankings to play in the Presidents Cup later this year.

He said Southern Hills reminded him of some of the golf courses in Thailand, but knows the challenges this week will be on the putting surfaces.

"This golf course is all about the green complexes. You have to navigate yourself and position yourself. If you have power and length, great.

"If you don't, you can still compete and contend and that's why I think it's such a good major venue as everyone has a chance to win this. It doesn't heavily favour one style of play," he said.

"It is a lot like something you might play in Thailand in terms of surfaces as it's common Bermuda grass. Obviously the greens are bent grass and very severe. A lot of it will be about controlling spin and controlling flight.

"The course is extremely firm, and I was trying to figure out how far it's going after it hits the ground. Even when laying up on the par 5s, you can have an 8 iron rolling 60 yards if it lands at the wrong place.

"I'm really glad I had the whole day to look at the golf course and get my prep work in."