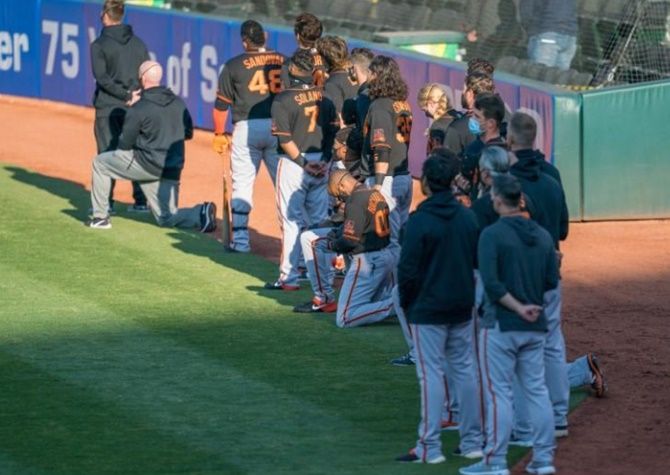 IMAGE: San Francisco Giants during the US National Anthem before the start of the game against the Oakland Athletics at Oakland Coliseum. Photograph: Neville E. Guard-USA TODAY Sports/Reuters

As professional sports in North America slowly return amid the COVID-19 outbreak, the debate over athletes kneeling during the national anthem as part of the fight against racial injustice is growing louder.

The protest movement sparked by former San Francisco 49ers quarterback Colin Kaepernick in 2016 has picked up steam, extending beyond the NFL, in the aftermath of the June death of George Floyd at the hands of police in Minneapolis.

Members of Major League Baseball’s San Francisco Giants took a knee during the anthem ahead of an exhibition game on Monday, leading US president Donald Trump on Tuesday to renew his criticism of the protests. 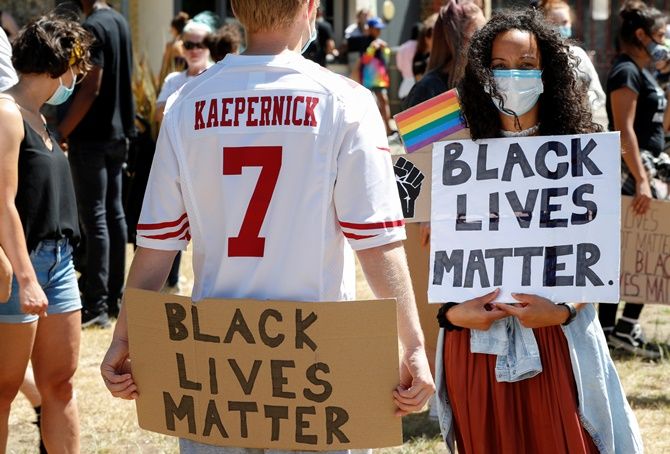 IMAGE: A man wears a jersey of former NFL quarterback Colin Kaepernick as he and other demonstrator hold placards during a Black Lives Matter protest. Photograph: Paul Childs/Reuters

“Looking forward to live sports, but any time I witness a player kneeling during the National Anthem, a sign of great disrespect for our Country and our Flag, the game is over for me!” he tweeted.

MLB defended those who knelt ahead of Monday’s exhibition game against critics, tweeting: “Supporting human rights is not political.” The league faced backlash, with the hashtag #BoycottMLB trending on Tuesday amid fierce criticism on Twitter.

Controversy over the kneeling gesture had eased somewhat in the world of sports, but many athletes across the globe have united in solidarity behind the anti-racism protests following a video of a police officer in Minneapolis kneeling on the neck of Floyd, causing his death. 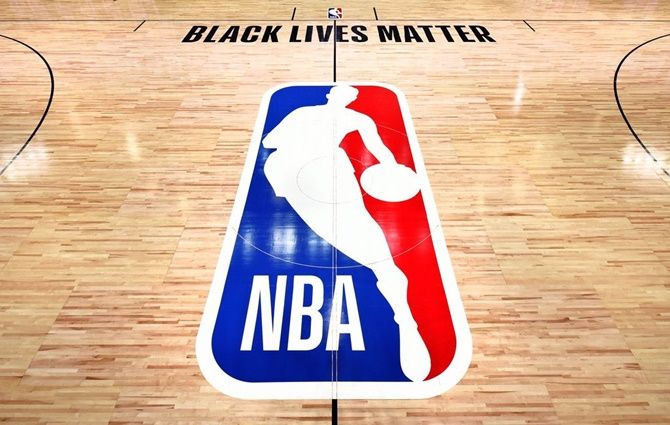 Among the athletes who have taken a knee in support of the Black Lives Matter movement are players from the English Premier League, Germany’s Bundesliga, Major League Soccer and the National Women’s Soccer League.

The NBA will have 'Black Lives Matter' printed on the game court for its July 30 restart in Orlando and players can have social justice messaging on the back of their jerseys in place of their last name.

“The National Anthem Police in this country are out of control. If you want to complain, complain to your boss and ask why they don’t play the National Anthem every day before you start work,” Mark Cuban, owner of the NBA’s Dallas Mavericks tweeted.