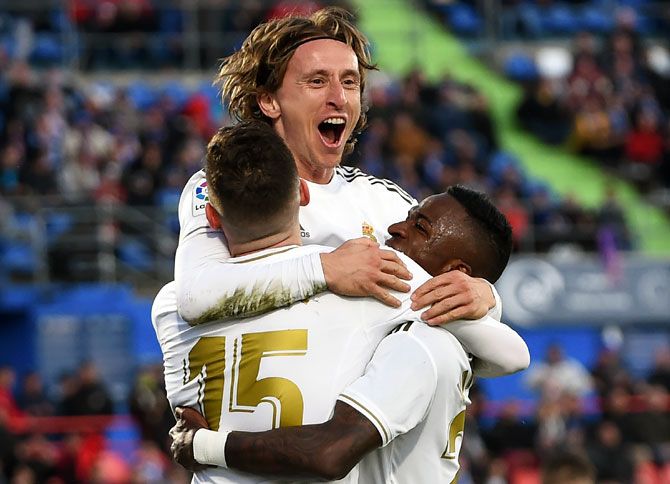 Real Madrid defender Raphael Varane made up for the absence of Sergio Ramos by scoring one goal and making another to help his side to a hard-fought 3-0 win at Getafe on Saturday, their first La Liga victory in four matches.

The win takes Real top of the standings on 40 points after 19 games, one ahead of champions Barcelona in second who visit local rivals Espanyol later on Saturday.

France defender Varane forced the opening strike for Real in the 34th minute, out-jumping goalkeeper David Soria to meet a cross from Ferland Mendy which rebounded off the keeper into the net for an own goal.

Varane again showed his aerial prowess to double Real's lead in the 53rd minute with a towering header from a Toni Kroos free kick, while Luka Modric rounded off the win by tapping a Federico Valverde pass into an empty net deep in added time.

"We knew we'd have to roll up our sleeves against a team who are very strong at home and we did a superb job and deserved the victory," said defender Dani Carvajal.

"It was a very important victory for us, we came here feeling good about our recent performances although we had only picked up three points out of nine and when you are fighting for the title you have to try and win every game."

Real were aiming to get back on the right track after drawing three games in a row against Valencia, Barcelona and Athletic Bilbao.

They were missing captain Ramos through suspension and were tested to the limits by seventh-placed Getafe at a sold-out Coliseum Alfonso Perez stadium and the final scoreline flattered Zinedine Zidane's side.

Real goalkeeper Thibaut Courtois made two top saves to shut out the home side in the first half, tipping away a thumping drive from Mauro Arambarri when the game was goalless and later thwarting Leandro Cabrera to protect the 1-0 lead.

Real went all out for a third goal in the closing stages of the game and Gareth Bale and Vinicius Jr. both missed clear chances to score before Croatia midfielder Modric finally struck to complete a rapid counterattack.

Bale had launched a pass into the path of Uruguayan youngster Valverde who raced into the area and could have shot himself but opted to selflessly square the ball to Modric who could hardly miss. 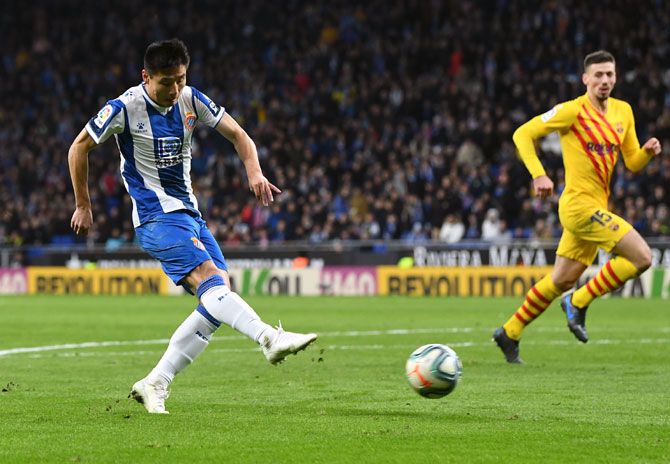 La Liga leaders Barcelona were held to a 2-2 draw at struggling Espanyol on Saturday as China striker Wu Lei came off the bench to grab a late equaliser in a pulsating city derby.

Barca's Frenkie de Jong was sent off and Espanyol's Wu struck two minutes from time after the champions had looked on course for victory when Arturo Vidal put them ahead in the 59th minute.

But Ernesto Valverde's side had to play the final 15 minutes with 10 men after De Jong was dismissed for a second booking and substitute Wu took advantage for La Liga's bottom side with a powerful finish.

Barca still top the standings on goal difference after 19 games but they are level on points with second-placed Real Madrid, who beat Getafe 3-0 earlier on Saturday.

"We did the hardest thing which is to come from behind away from home and take the lead so it feels like two points dropped," Suarez said.

"It's always tougher with one player less, as the opponent starts to grow in confidence but it's not an excuse. We are the champions and we are obliged to win every game so we need to come up with some solutions." 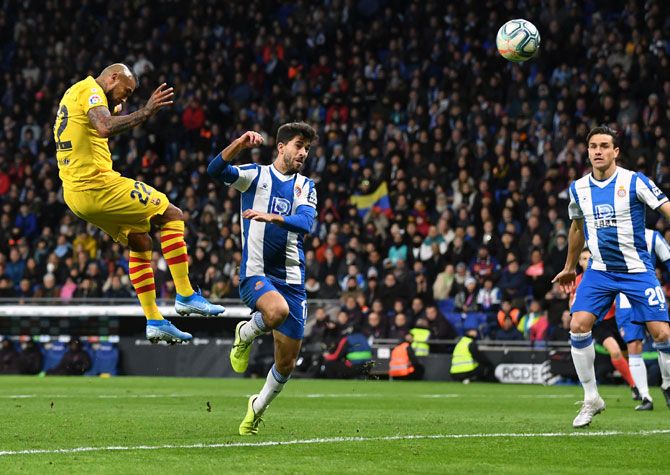 Valverde said the sending-off had been crucial.

"De Jong's red card did us a lot of damage, we had three chances to finish them off then with one chance they equalised," the coach said.

"Everything was in our favour then we were knocked out of shape. We feel bad because we wanted all three points."

Valverde's side went into their first match of the new year top of the table while Espanyol were bottom but hoping for a new lease of life in their first game under Abelardo Fernandez, their third coach of the season.

Espanyol had not beaten their more glamorous neighbours in the league since 2009 but they made an excellent start and deservedly went ahead in the 23rd minute when defender Lopez escaped his marker to nod home Marc Roca's free kick.

Barca did not create their first clear chance until Lionel Messi headed a cross into the arms of Espanyol keeper Diego Lopez towards the end of the first half, while Suarez smacked a post moments later.

Valverde took decisive action at the start of the second half by hooking Ivan Rakitic for Vidal, who last month filed a complaint to Spain's players' union over an unpaid bonus.

The Uruguayan then turned provider, finding Vidal's head with a stylish cross with the outside of his boot.

Barca looked intent on killing their opponents off but a mistake from De Jong made him panic and commit a foul which led to his second booking and the champions were suddenly on the back foot.

Espanyol's Wu came close to equalising when his header was saved by Barca's stand-in goalkeeper Neto, but the Chinese forward soon got the better of the Brazilian to give his coach Abelardo a memorable debut against his former side.