'We’re here behind you. We will be here for you' 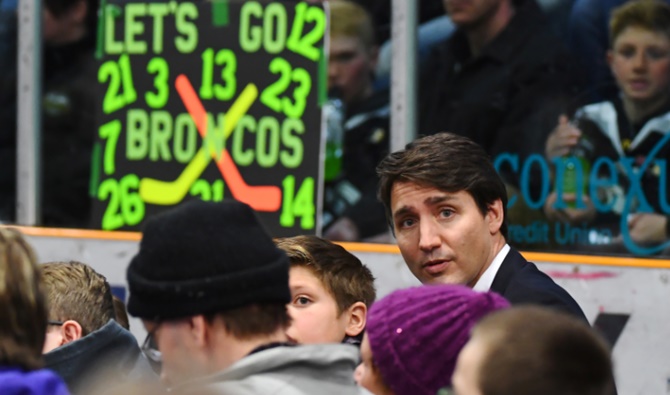 IMAGE: Prime Minister Justin Trudeau attends a vigil at the Elgar Petersen Arena, home of the Humboldt Broncos, to honour the victims of a fatal bus accident in Humboldt, Saskatchewan. Photograph: Jonathan Hayward/Pool via Reuters

Canadian Prime Minister Justin Trudeau joined religious and community leaders at an emotional vigil on Sunday night to honor the 15 members of a junior ice hockey team killed in a bus crash that shocked the hockey-loving nation.

Hundreds of people including National Hockey League (NHL) players attended the vigil at the Elgar Petersen Arena, home of the Humboldt Broncos club at the center of one of the worst disasters to hit Canada's sporting community. IMAGE: Mourners comfort each other during a vigil. All Photographs: Jonathan Hayward/Pool via Reuters

"We’re here behind you. We will be here for you," Rob Muench, mayor of the small farming town of Humboldt in Saskatchewan province, told the gathering.

"We will get through this."

Fourteen other members of the Humboldt Broncos junior hockey team were injured in the accident, which occurred as the team was traveling to a league playoff game in the town of Nipawin, about 200 km (125 miles) northeast of Humboldt, on Friday.

The bus collided with a semi-trailer truck. Canadian police are looking into road, weather and vehicle conditions. 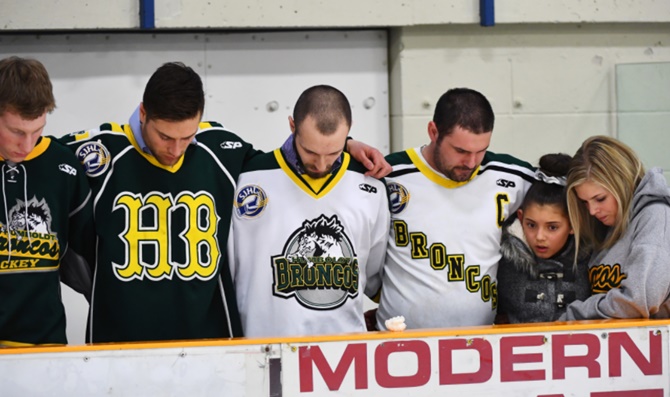 Former NHL star Sheldon Kennedy was among those who were expected to attend the vigil, along with former players Bob Wilkie and Peter Soberlak. Kennedy was on board a bus involved in another fatal crash in 1986, in which four members of the Swift Current Broncos were killed.

One minute silence was observed at the time when the playoff was scheduled on Sunday evening.

"Today and for every day forward we are all humble Broncos and we will be forever humble Broncos strong,” Broncos President Kevin Geringer told the members attending the vigil.

For the prairies community of Humboldt, population about 6,000, ice hockey is a sport that unifies the town and gives it its identity, bringing home two national championships.

Townspeople and team supporters gathered at the local Uniplex sports and education complex to comfort each other. An online fund-raising initiative to help the victims' families has raised C$3.7 million ($2.9 million). 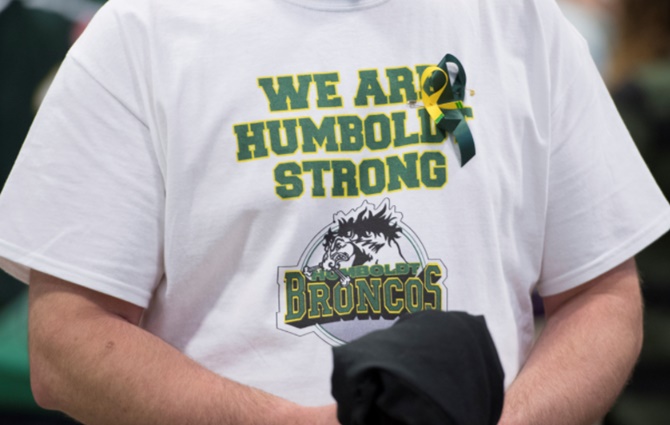 Rob Eichorst, the team's governor, said Sunday's interdenominational vigil was organized by local religious leaders 'for healing of the community, the hockey team, the province, the country'.

"There's no playbook on how to handle this," Eichorst said. "People are bringing food ... We've got multinational companies helping us, we've got national companies offering stuff. The support is overwhelming and truly appreciated."

He estimated 300 to 400 people had gathered at the complex on Friday evening. Grief counselors were on hand and the Red Cross was providing support to players' families as well as the families who billet players.