All the gold medallists from Saturday's action at the Tokyo Olympics. 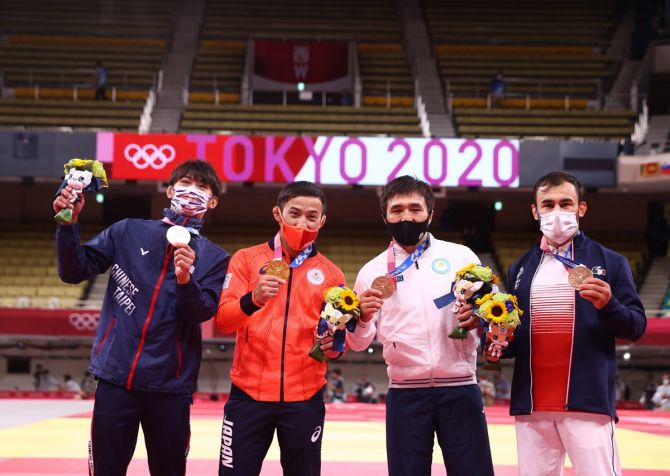 Naohisa Takato won the final of the men's 60kg judo to give host nation Japan their first gold medal of the Tokyo Olympics on Saturday, defeating Yang Yung-wei of Taiwan in the final.

Takato's victory underscored Japan's strength at a sport that originated in the country. Bronze medals went to Yeldos Smetov of Kazakhstan and Luka Mkheidze of France.

The dramatic victory that left Takato in tears stood in contrast to the lack of fans at an empty arena at the Nippon Budokan, a mecca of Japanese martial arts and concert venues.

Tonaki, a one-time world champion making her Olympic debut, won a nailbiting semi-final with an ippon - judo's equivalent of a knockout - by pinning Ukraine's Daria Bilodid in Golden Score overtime.

Japan's triple world champion Takato, a bronze medallist at the Rio 2016 Games, had a close shave in his quarter-final in the 60kg class, winning during Golden Score overtime on a foul by his Georgian opponent Lukhumi Chkhvimiani.

In the elimination round of 16, Takato had delivered an ippon against Belgian Jorre Verstaeten. China's Zhihui Hou won the gold medal in women's 49-kg weightlifting at the Tokyo Olympics, bagging the second gold for China in as many competitions, with a comfortable win over Indian and Indonesian medalists.

Hou broke the Olympic records in all three categories of snatch, clean and jerk, and total with 210 kg, three kilos short of her own world record. She also holds the world record with 96 kg in snatch, which she didn't attempt in Tokyo.

In Rio 2016, Chanu was one of two athletes in her category who didn't register a total, after failing all three of her clean and jerk attempts.

There are two Olympic lifts: the clean and jerk, and the snatch. Each athlete is allowed three attempts at each lift. The best lift in each is combined to determine the overall total. Athletes must successfully attempt the snatch before proceeding to the clean and jerk. China's Yang Qian won the first gold medal of the Tokyo Olympics on Saturday after prevailing in a battle of nerves with Russian Anastasiia Galashina in the women's 10-metre rifle final.

Galashina barely made it to the final, grabbing the last of the eight qualifying slots, but was in pole position for gold until she cracked under the pressure.

That pressure also weighed heavily on South Korean shooting great Jin Jong-oh, whose quest for a record-extending fifth individual Olympic gold fell short when he failed to qualify for the final of the men's 10m air pistol.

Javad Foroughi comfortably beat an elite field to win gold, Iran's first ever shooting medal, with a Games record total of 244.8 in the final. Foroughi told reporters he was able to maintain his composure in the final because he had stumbled in qualification but still made it through.

"That's why I was relaxed during the final because in the qualification round I was so nervous and still did well," he said.

In the women's rifle final, Galashina's hopes were dashed by her last shot of 8.9, which was the lowest of any competitor in the final, leaving her on a total of 251.1.

Yang was not immune to the pressure at the Asaka Shooting Range either but her below-par final shot of 9.8 was still enough to snatch the gold with an Olympic record total of 251.8.

In the stands, supporters and team mates watched the nail-biting women's final, cheering to the rock music piped into the venue.

"We did train how to perform under pressure. The coaches would actually create a nerve-wracking atmosphere and try to pressure us," Yang told reporters after winning an event which did not feature a single medallist from Rio.

Galashina said the pressure got to her on the final shot. Bronze medals went to Daria Bilodid of Ukraine and Urantsetseg Munkhbat of Mongolia. Popescu tied the score at 10 with three seconds left for overtime, but Sun scored the winning point in the deciding period to emerge triumphant.

The victory enabled Sun complete her set of Olympic medals, having won an individual bronze and team silver at the 2016 Rio Games.

The Romanian failed to win an individual gold medal at any of her five Olympic appearances. She won team gold in 2016. Hungarian fencer Aron Szilagyi made Olympic history on Saturday when he won the men's individual sabre event, defending his title and becoming the first man to take three gold medals in a single discipline in the sport.

When he won the final point over Italy's Luigi Samele, Szilagyi took his mask off and broke into a wide smile, pointing a finger to the sky.

"It's amazing. I can't tell you my feelings, but I'm very much overwhelmed," he told reporters.

Szilagyi came close to losing a tight and tense semi-final against Georgian Sandro Bazadze. They were locked at 13-13 and Szilagyi's final two points were awarded after deliberation by the referees, prompting Bazadze to throw his arms up in the air and eventually storm off into a back room.

But the Hungarian laid in strong from the beginning of the final with quick, decisive strokes, and the bout was over within ten minutes.

He took in the cheers from the crowd of volunteers, team members, and Olympic-related staff in an otherwise spectatorless venue and held the Hungarian flag aloft, while a coach massaged silver medallist Samele's leg as the Italian shrugged and shook his head at team mates. Although not a popular sport in South Korea, the country's Olympic record in archery is unmatched. It has won gold medals at archery in every Games since 1984, and the women's team is aiming for its ninth straight gold, which would be the longest streak in Olympic history. The 28-year-old mountain man, known in the men's professional peloton as La Locomotora by dint of his relentless engine, shrugged off everything the elite field could throw at home before launching a solo bid for glory.

Better known as a climbing specialist with his Ineos Grenadiers team, Carapaz powered home like a Formula One car on the Fuji International Speedway to leave his rivals trailing a minute behind him in his tracks.

It was a masterful performance and will go down in Ecuador's sporting folklore as he delivered only the country's second Olympic gold medal after Jefferson Perez's victory in the race walking event at Atlanta in 1996.