'We did it together. We came here as a team. My team mates and my boys all played well, the captains did an amazing job.' United States captain Tiger Woods led from the front as the Americans dominated the Sunday singles to overhaul the Internationals at Royal Melbourne and claim an eighth successive Presidents Cup.

Woods clinched a record 27th win in the event with a 3&2 victory over Abraham Ancer to fire up his team and then beamed from the sidelines as they landed crushing early blows before sealing the event with a match to spare.

Matt Kuchar rolled in the winning putt from just over five feet on the par-four 17th in the penultimate match against Louis Oosthuizen, ensuring the Americans would reach the minimum winning score of 15.5 points.

"We did it together. We came here as a team. My team mates and my boys all played well, the captains did an amazing job," a thrilled Woods said.

"It's been one of the more amazing challenges but ... all the guys, they believed in one another and relied on one another." Woods's over Ancer brought his record at the biennial event to 27 victories, 15 losses and one halved match in his ninth appearance as a player, eclipsing compatriot Phil Mickelson's 26-16-13 tally.

The captain finished his playing duties with an unblemished 3-0-0 record for the week.

Patrick Reed, under pressure after losing all three of his previous matches at Royal Melbourne, nudged the United States into the lead with a 4&2 win over Taiwan's C.T. Pan.

Reed had his swing coach Kevin Kirk carrying his bag after his brother-in-law caddie was ejected from the event for clashing with a spectator on Saturday.

Fiery Texan Reed charged out of the blocks with six birdies in the opening seven holes and weathered a comeback from Pan, who trimmed a six-hole lead to two by the 13th.

Reed birdied the 15th and 16th holes to seal the match and finish a difficult tournament on a high note.

"The last couple of days were tough and today wasn't easy," said Reed, who was heckled throughout the event for a controversial bunker penalty in the Bahamas last week.

"I played some amazing golf but he put the pressure right back on me." 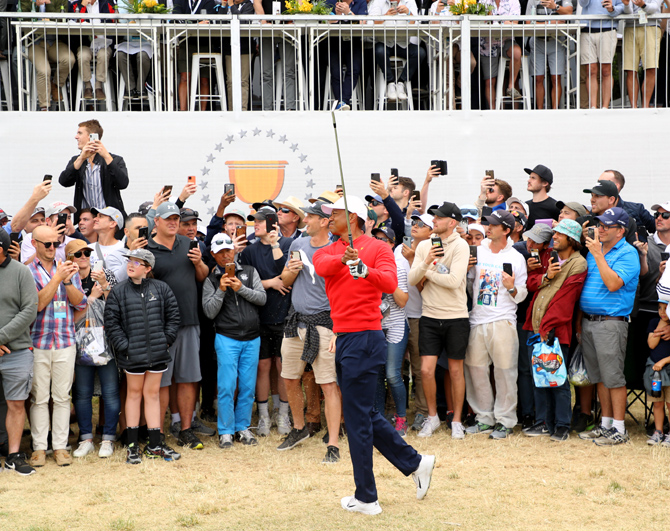 Tony Finau then grabbed a half-point for the Americans, having clawed back from four holes down after the ninth against Hideki Matsuyama.

Im Sung-jae earned a point for the Internationals with a 4&3 win over Gary Woodland to level the scores while Adam Hadwin delayed the U.S. procession by grabbing a half-point against Bryson DeChambeau.

But Patrick Cantlay snatched back the lead with an emphatic 3&2 win over Chilean debutant Joaquin Niemann.

Adam Scott, condemned to a ninth defeat in nine Cup appearances, battled back from four holes down but Xander Shauffele did enough to claim a 2&1 victory and the Americans' 14th point.

Webb Simpson cruised to a 2&1 win over South Korean An Byeong-hun to slam the door shut on the Internationals' hopes of ending their Cup drought.

Much of the suspense was drained from the contest but Australian Cameron Smith buoyed home fans by curling in a seven-foot birdie to trim the Internationals' deficit to two before Kuchar stepped up to extend the American reign over the event.