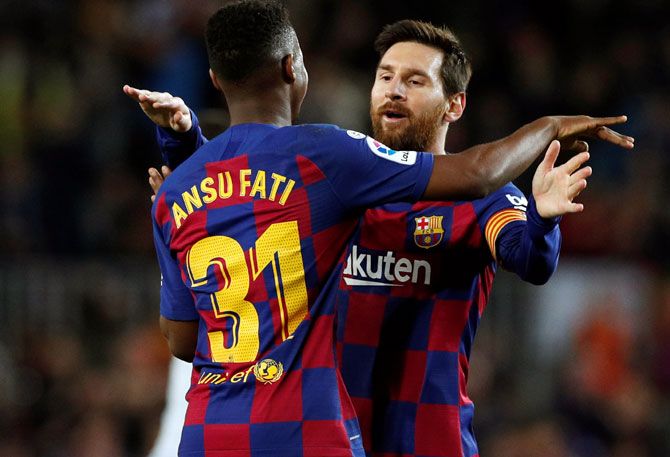 Barcelona teenager Ansu Fati scored twice to lead his side to a 2-1 win at home to Levante on Sunday, finding the net in a league game for the first time in more than four months and becoming the youngest player to net a La Liga double.

Fati, 17, latched on to a superb crossfield ball from Lionel Messi and fired between the legs of Levante goalkeeper Aitor Fernandez to give Barca a deserved lead on the half-hour mark.

The Guinea-Bissau-born forward promptly linked up with Messi again to double Barca's lead two minutes later, getting some good fortune as the ball bobbled through the legs of Fernandez and into the net.

Levante, who beat Barca 3-1 at home earlier this campaign, got a consolation goal in added time through Ruben Rochina and the forward had a chance to snatch an unlikely equaliser moments later but could not keep his shot under the bar.

The victory took second-placed Barcelona to within three points of leaders Real Madrid, who beat Atletico Madrid 1-0 in the city derby on Saturday. 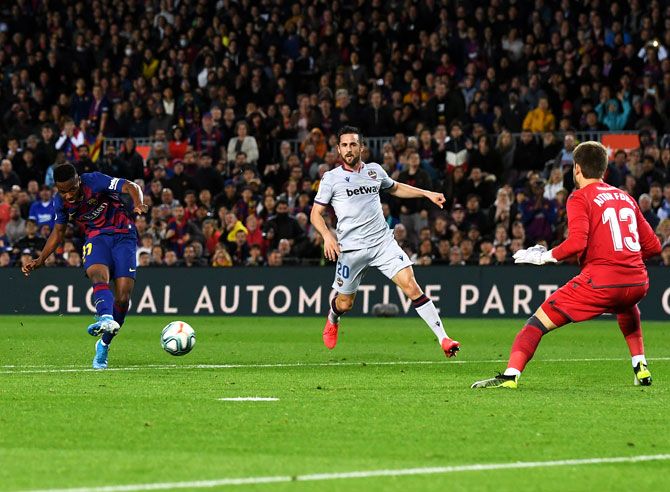 Elsewhere, Getafe climbed into third place after winning 2-0 at Athletic Bilbao, leapfrogging Sevilla who could only draw 1-1 at home to Alaves.

"This is all a dream, I dreamed of moments like this and I want to thank my team mates and my coach for giving me another opportunity," Fati told reporters.

"It's not easy to come into a team like this as a young boy but I'm very grateful for the support I've had. I've still got a lot more to come, I like playing with Messi it's a dream to play alongside him, but I want to continue fighting for my place."

Fati wrote himself into Barca's history books last August by becoming the club's youngest ever league scorer with a goal against Osasuna while still aged 16, making the most of a spate of injuries afflicting the team's forward line.

He struck against Valencia a month later before drifting out of the team, although he made history again last December with a goal against Inter Milan that made him the youngest player to score in the Champions League.

Injuries to Luis Suarez and Ousmane Dembele have given the youngster another run in the team and this was his fourth start under coach Quique Setien, who pledged to give young academy players a chance when he succeeded Ernesto Valverde last month.

Fati certainly made the most of this opportunity, dovetailing superbly with Messi and showing confidence in front of goal in contrast to fellow forward Antoine Griezmann, who squandered two clear chances to score in the first half.

He was not far from scoring a hat-trick, attempting an audacious bicycle kick late in the game which fizzed narrowly wide of goal.

"He has huge potential but we have to remember he is a young lad," said Setien.

"We have to be patient with him and give him the confidence he needs to make the most of his talent. As well as the two goals, I appreciate the work he did in defence. He put out lots of fires for us." 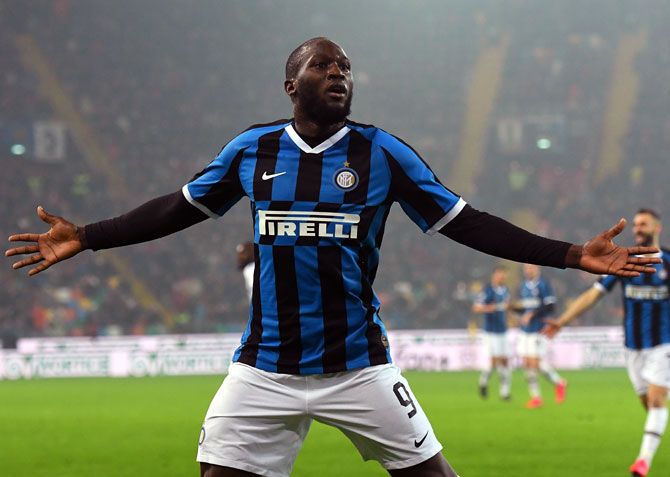 Romelu Lukaku scored a quickfire second-half double to give Inter Milan a 2-0 win at Udinese on Sunday, ending their run of three successive 1-1 league draws and keeping them three points behind Serie A leaders Juventus.

The Belgian forward, who took his league tally for the season to 16, broke the deadlock in the 64th minute and converted a penalty seven minutes later for new-look Inter, who had been on the back foot for much of the game.

Inter, with 51 points from 22 games, stayed three points behind leaders Juventus, who beat Fiorentina 3-0 earlier on Sunday, and two ahead of Lazio, who thumped SPAL 5-1. However, Lazio have a game in hand, at home to Verona on Wednesday.

"Lukaku has important qualities although he didn't have his best game today, other than scoring a double," said Inter coach Antonio Conte. "He's still crucial for us and I'm happy to have insisted that he came."

Conte added that his demands for reinforcements in the January transfer window had been justified. "A team like Inter has to have a strong bench," he said.

Inter were also without goalkeeper and captain Samir Handanovic so they gave a rare outing to Daniele Padelli.

Udinese created enough chances to have had a first-half lead. Seko Fofana fired into the side netting while Ashley Young did well to block Jens Stryger-Larsen’s shot and Rodrigo De Paul had a chance in first-half stoppage time but shot straight at defender Alessandro Bastoni.

Inter's best first-half opening fell to Matias Vecino after a good run by Moses but the ball hit the Uruguayan's knee and flew wide.

De Paul had another chance on the hour after Ken Sema's cross found him unmarked in the penalty area but the Argentine slipped and sent his shot wide.

Having survived that, Inter went ahead when Nicolo Barella's pass found Lukaku and his shot went through the legs of defender Bram Nuytinck and past unsighted keeper Juan Musso and into the net.

Substitute Alexis Sanchez's cross glanced the post and Lukaku was foiled by Musso from close range before Inter struck again.

Sanchez burst into the penalty area, was upended by a clumsy challenge from Musso and Lukaku scored from the spot, completing a third successive league defeat for Udinese who dropped to 15th.