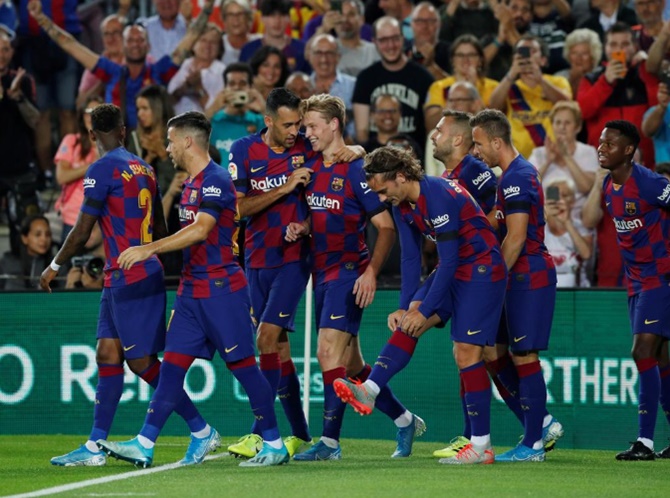 Barcelona’s 16-year-old forward Ansu Fati continued his explosive start to life in the first team by scoring and providing an assist as the La Liga champions thrashed Valencia 5-2 on Saturday.

Kevin Gameiro and Maxi Gomez scored for Valencia, who suffered their biggest defeat in over three years in coach Albert Celades’ first game.

The victory took Barca on to seven points after four games, while Valencia have four.

Fati, who became Barca’s youngest ever goalscorer two weeks ago by netting at Osasuna, struck his first goal at the Camp Nou to give Barca the lead with less than two minutes on the clock by smashing a pass from De Jong into the net.

The goal had the injured Lionel Messi grinning in admiration as he watched on from the stands but the teenager had fans on their feet again five minutes later as he dashed into the area and teed up De Jong to score his first goal for the club.

Valencia were playing their first game since owner Peter Lim took the surprise decision to sack Marcelino, the coach who had secured Champions League football twice and also led the team to victory over Barca in last year’s Copa del Rey final.

They pulled a goal back later in the half through Kevin Gameiro but Barca came flying back at them after the interval.

Pique bundled the ball into the net in the 51st minute after Antoine Griezmann had hit the post while Luis Suarez netted twice after coming off the bench.

Making his return after getting injured on the first day of the season, Suarez flummoxed Valencia goalkeeper and former team mate Jasper Cillessen with two thumping finishes, one which went in off the near post, the other settling in the near corner.

Suarez was given a warm reception by Barca fans but it was nothing compared to the remarkable standing ovation they gave to Fati, who heard his name chanted by supporters when he came off to make way for the Uruguayan.

“He (Fati) is delighting the fans and making them very excited,” said Sergio Busquets of the teenage sensation.

“Every time a player like him bursts on to the scene he is compared to many players but we need to support him and let him continue to grow. He still needs to be aware of where he is and how difficult it is to make it.”

Maxi Gomez got a consolation goal in stoppage time for Valencia, who fell to their heaviest defeat since they were thumped 7-0 at the Camp Nou in 2016 when Gary Neville was in charge.

“We cannot forget what has happened in the last few days and how traumatic it has been for some,” said beaten coach Celades, who is in his first role as a senior first team coach.

“This scoreline hurts us a lot but we can only look forward and keep working and try to improve.” 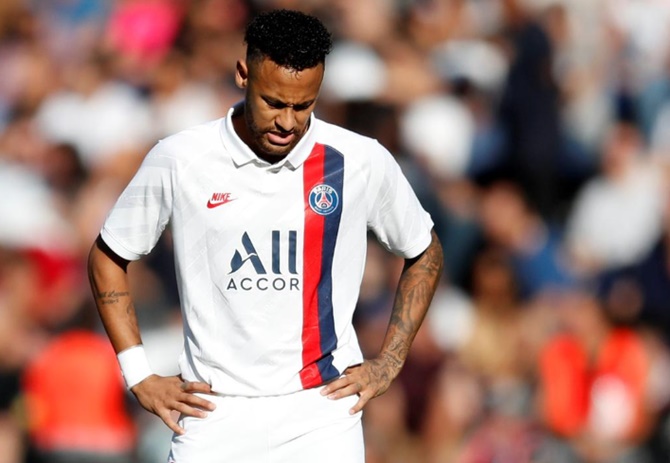 Paris St Germain striker Neymar expects to get a hostile reception no matter where he plays this season after sections of the home crowd turned a blind eye to his match-winning performance on Saturday and booed the want-away Brazilian.

Neymar scored a spectacular goal with a bicycle kick two minutes into stoppage time to give the home side a 1-0 win over Racing Strasbourg.

But that was not enough to placate some of the fans who are not only angry with him for trying to force a move back to his former club, Barcelona, but also because he said his best memory as a footballer was PSG’s humiliating 6-1 Champions League defeat by Barca in 2017.

On Saturday Neymar admitted that PSG had blocked his move back to Spain before adding he had put the disagreement behind him.

“I had my reason, I wanted to leave, that is clear,” he told reporters in Portuguese.

“I did all I could, but they wouldn’t let me. But I am not going to go into details, the page has turned. This is the first time I am saying this and it will be the last, because my head is now dedicated to Paris and I hope to help my team mates in our games.”

Some of the fans cheered the player after he scored the winner but there were also boos. During the game, supporters also barracked the controversial striker and held up offensive banners.

Neymar, though, brushed off the incidents and appealed for fans to put their dislike of him to one side.

“So it’s sad but I know that all the games from now on will be away games. I have nothing against the fans or PSG. I don’t need them to cheer my name or be there for me.

“I want them to be there for PSG,” he added.

“They say PSG is bigger than any player. They need to forget that player and support the team, that is more important than booing. It didn’t bother me at all. It’s very sad. It bothers my team mates but it’s part and parcel.”

© Copyright 2020 Reuters Limited. All rights reserved. Republication or redistribution of Reuters content, including by framing or similar means, is expressly prohibited without the prior written consent of Reuters. Reuters shall not be liable for any errors or delays in the content, or for any actions taken in reliance thereon.
Related News: Barca, Ansu Fati, Valencia, Paris St Germain, Neymar
SHARE THIS STORYCOMMENT
Print this article