IMAGE: Cristiano Ronaldo celebrates with his teammates after scoring the first goal for Juventus against FC Crotone at Allianz Stadium in Turin, on Monday. Photograph: Valerio Pennicino/Getty Images

Cristiano Ronaldo scored twice as Juventus strolled to a 3-0 home win over bottom side Crotone in the Italian Serie A on Monday, with the victory taking the champions up to third in the standings.

Juve were a little sluggish to get going, but their ever-reliable talisman arrived to meet an Alex Sandro cross in the 38th minute to give Andrea Pirlo's side the lead.

Ronaldo looked hungry for more and another bullet header in first-half stoppage time doubled the lead, taking the Portugal forward back to the top of the league's scoring charts on 18 goals, one ahead of Inter Milan's Romelu Lukaku.

The 36-year-old had chances to complete a hat-trick but it was Weston McKennie who added the third, hammering home his fourth Serie A goal of the season in the 66th minute.

A first win in four matches in all competitions ensured Juve climbed from sixth to third in the table and onto 45 points, eight behind leaders Inter with a game in hand.

"The desire we have to return to the top makes me feel comfortable," Pirlo said. "The attitude of the players also pleases me.

"When we have more players free from injury I will have more choice and this also makes me feel comfortable. We know that Inter are a great team and we know we have to fight [to win the title]." Crotone remain rooted to the foot of the table with 12 points from 23 games, eight points from the safety zone.

Aaron Ramsey thought he had given the champions the lead with a looping header only to see the ball come out off the crossbar, before Ronaldo showed him how it is done with two expertly-taken headers.

A glaring miss at the end of the half showed Ronaldo is only human, before two fine saves denied him another hat-trick after the break.

McKennie's close-range finish put the game beyond doubt, but the league's top goalscorer was still doing everything he could, right until the last minute, to add another. 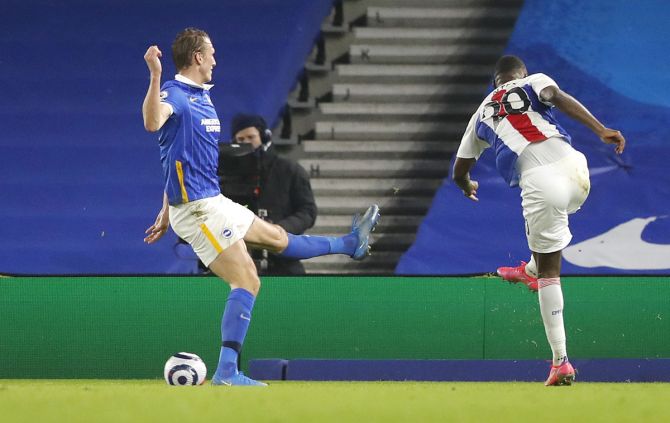 Christian Benteke's stoppage-time volley earned Crystal Palace a dramatic 2-1 victory at Brighton & Hove Albion in the English Premier League on Monday, despite the visitors being second best for much of the contest.

Palace took the lead as loan signing Jean-Philippe Mateta scored his first goal in English football with an improvised finish in the 28th minute.

Brighton improved after the break and pulled level in the 55th minute through Joel Veltman, who swept home his first goal for Graham Potter's side as the ball broke loose in the penalty area.

The chances kept coming for Brighton as they finished the match having had 25 shots at goal.

But Palace, from just three efforts, scored twice, with Benteke popping up with the winner to break Brighton hearts in the 95th minute.

The win moved Palace up to 13th in the standings on 32 points. Brighton remained 16th on 26 points, four points clear of the relegation zone.

"It is a massive result," Benteke told Sky Sports. "We know we play a derby against a very good side.

"It wasn't easy, they managed to come back in the game in the second half. We put our lives on the line, tried to defend as much as we could and I had a chance to score a great goal."

Brighton came into the match unbeaten in their last six league games, but it was Palace who struck first. The finish was exquisite as Mateta, on loan from Bundesliga side Mainz 05, let the ball come through his legs before backheeling it in.

Mateta's opener was the first goal Brighton had conceded on home soil in the Premier League in 343 minutes, but their defence was rarely troubled after that..

Brighton's finishing let them down time and again, with only five of their 25 attempts at goal hitting the target.

"It is difficult, a very sore one, we did everything but get the points," Potter told Sky Sports.

"They were in our box I think twice and scored two. That is the beauty of football but it doesn't feel so beautiful at the moment, it feels painful."

Benteke latched on to Andros Townsend's cross to secure an unlikely victory with his first league goal since mid-December. 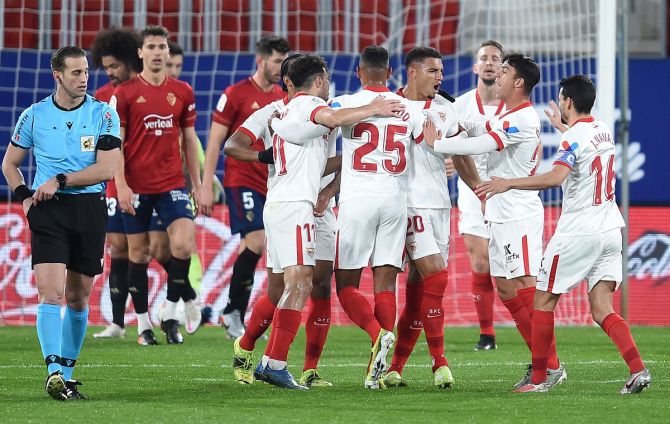 Sevilla's Diego Carlos and Luuk de Jong got on the scoresheet to secure a fifth La Liga win in a row as their side enjoyed a 2-0 victory at Osasuna on Monday to move above Barcelona into third place and join the title race.

Osasuna defender Oier Sanrujo almost got the hosts off to a perfect start when he sent a header crashing against the post in the opening minutes but it was Sevilla's Brazilian defender Diego Carlos who broke the deadlock.

The Spaniard outjumped two Osasuna players to meet an out-swinging corner from Joan Jordan and his header had too much power for goalkeeper Sergio Herrera to keep out.

De Jong put the visitors further ahead early in the second half with a backheel to guide a low cross from Munir El Haddadi into the net, while substitute Papu Gomez nearly added a third late on but was denied by Herrera.

It was a welcome victory for Sevilla after their 3-2 home defeat by Borussia Dortmund in the Champions League last-16, first leg last week and saw them move to 48 points, one point ahead of Barca who drew 1-1 at home to Cadiz on Sunday.

They took advantage of Atletico Madrid's 2-0 defeat by Levante on Saturday to close the gap with the leaders to seven points with 15 games left, adding more intrigue to a title race which looked like a forgone conclusion less than a month ago.

Sevilla are also four points behind second-placed Real Madrid, with a game in hand.

"We played well in every aspect, we were solid defensively against a team that plays with a lot of intensity and pace while not altering our usual attacking style," said Lopetegui.

"Apart from their early clear chance, we were superior to them throughout the game."

Sevilla now turn their attentions to a double header with Barcelona, hosting the Catalans in La Liga next Saturday with a chance to go four points above them.

They then head to the Camp Nou for a Copa del Rey semi-final second leg on Wednesday, holding a commanding 2-0 lead.

Lopetegui was not interested in discussing his side's title credentials but said fans should feel free to entertain the prospect of a tilt.

"We have a limited amount of energy and we have to dedicate it all to thinking about our next game. Today was very tough and now we have to think about facing Barcelona. But it's not my place to tell people how they should feel about that." 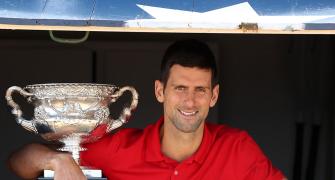 Olympic-bound athletes to get vaccine: Rijiju 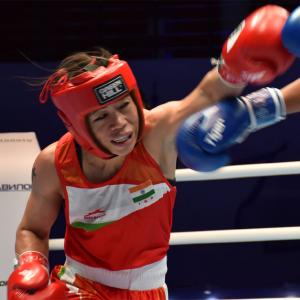