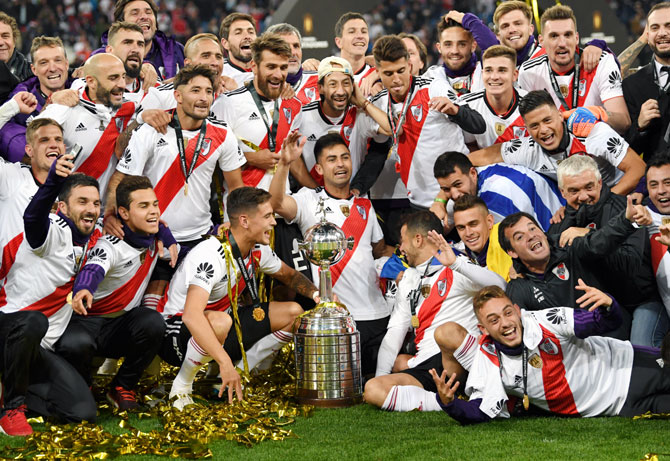 IMAGE: The River Plate team celebrate with the Copa Libertadores Trophy following their victory in the second leg of the final match against Boca Juniors at Estadio Santiago Bernabeu in Madrid, Spain, on Sunday. Photograph: Matthias Hangst/Getty Images

Dario Benedetto put Boca ahead at the end of a bruising first half at a raucous Santiago Bernabeu stadium that was equally split between supporters of the two teams but witnessed barely a hint of crowd trouble.

But River, who also came back twice in the 2-2 draw in the first leg at Boca's Bombonera stadium, levelled in the 68th minute through striker Lucas Pratto after a superb team move. 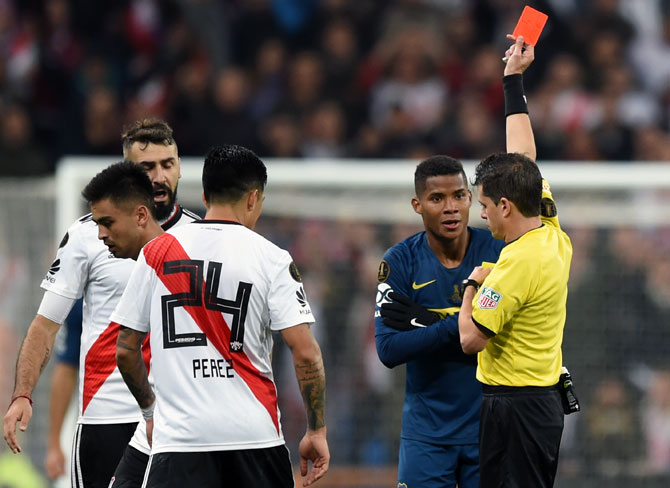 River, whose coach Marcelo Gallardo was banned from the sidelines, were given a huge advantage when Boca's Colombian midfielder Wilmar Barrios was sent off in the third minute of extra-time and seized it thanks to a sizzling strike from his compatriot Juan Fernando Quintero in the 109th minute.

Gonzalo Martinez sealed victory, 5-3 on aggregate, at the death with a tap in after Boca's entire team had poured forward in search of an equaliser, giving River a fourth Libertadores title and denying Boca a record-equalling seventh.

"I didn't think about it," Quintero said of his goal. "Camilo (Mayada) passed it to me and I looked for space and then hit it. It was a lovely goal and you have to celebrate it."

Martinez added: "We were the only team out there that tried to win. We played the whole match in their half of the field." 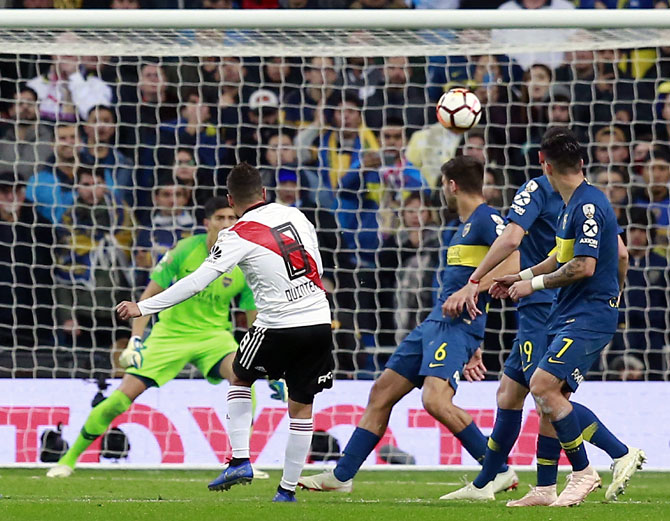 River's victory means they will represent South America in the Club World Cup that kicks off on December 12 in the United Arab Emirates and guarantees them bragging rights over their neighbours for many years to come.

The club are expected to fly directly to the Middle East but striker Lucas Pratto said the players would take some time to celebrate before their first match on December 18.

"We want to enjoy this because I don't think we'll win another Cup against Boca like this," said Pratto.

The game was controversially moved 10,000 kilometres away from River's Monumental stadium to Madrid as Boca's team bus had been ambushed before the originally scheduled game, leaving several Boca players injured from the impact of the smashed windows and from tear gas that had been fired by police.

It meant that instead of a home game with the exclusive presence of River supporters, Real Madrid's Bernabeu was equally-divided between fans of both sides, a highly unusual situation in the Copa Libertadores, South America's equivalent of the Champions League.

The final, the first in the 58 years of the competition to be played outside of Latin America and the first between Argentina's two biggest clubs, provoked furious protests from both clubs, their fans and leading figures in Argentine football. Luis Cesar Menotti, Argentina's 1978 World Cup winning coach, called the switch "an aberration". 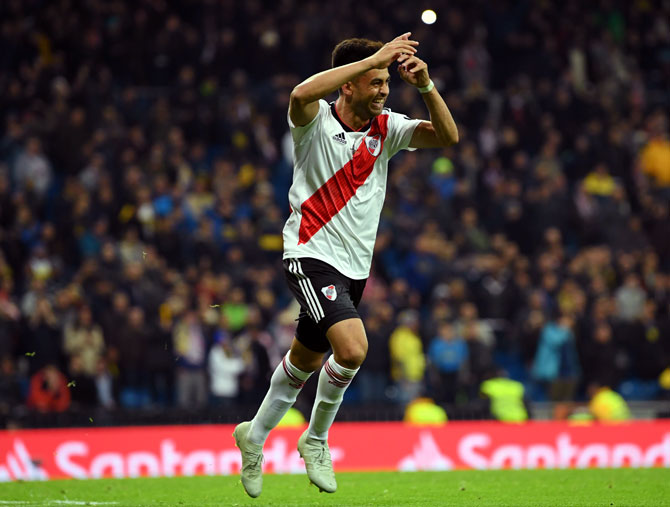 River decried the loss of home advantage Boca had enjoyed in the first leg, while Boca claimed they should have been awarded the trophy by default, pointing to when they were thrown out of the competition in 2015 when River players were attacked with pepper spray at halftime.

There was also a deep sense of irony at the fact a competition named in honour of the liberators of south America was to be played in the home of their former rulers.

Despite the controversy, a total of 10,000 fans made the long journey over from Argentina for the occasion, with the nation's considerable expatriate communities across Europe (250,000 reside in Spain alone) also flooding in to the Spanish capital, creating a carnival atmosphere that was mostly cordial.

Spanish police had mounted the biggest ever security operation for a football match in the country, deploying over 4,000 personnel including more than 2,000 police officers.

The security costs were countered by a considerable windfall for the city, which local government officials put at an estimated minimum 55 million euros. 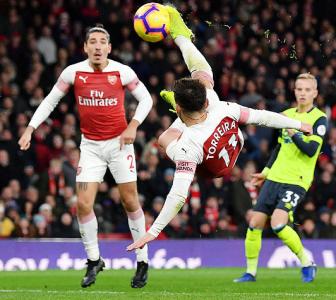 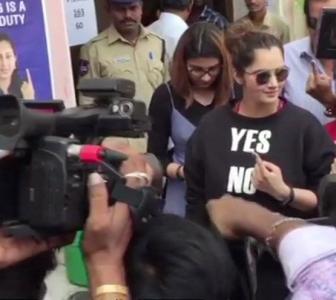 No... Gambhir is not joining politics