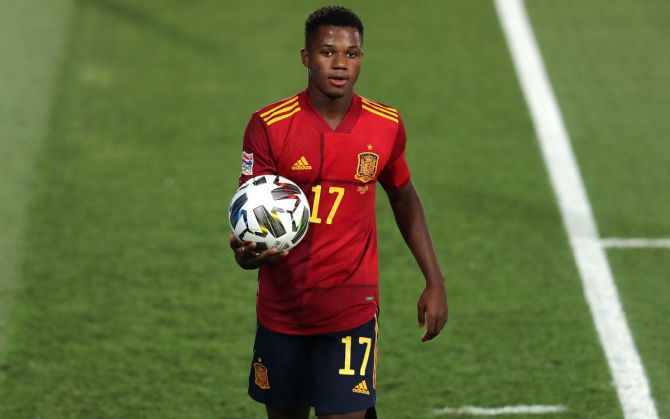 Spain forward Ansu Fati became the national team's youngest ever goalscorer as the 17-year-old inspired Luis Enrique's side to a resounding 4-0 win at home to Ukraine in the UEFA Nations League on Sunday.

Spain captain Sergio Ramos scored the opening goal with a penalty in the third minute after Fati had earned the spot-kick and the defender also doubled his side's advantage by heading home in the 29th minute.

Ramos's double moved him on to 23 goals for Spain, overtaking former Argentina player Daniel Passarella as the highest scoring defender for an international team.

Yet the night belonged to Fati, who finally got a goal worthy of his inspirational performance by firing in off the post from outside the area in the 33rd minute, having gone close with an overhead kick and another effort earlier on. 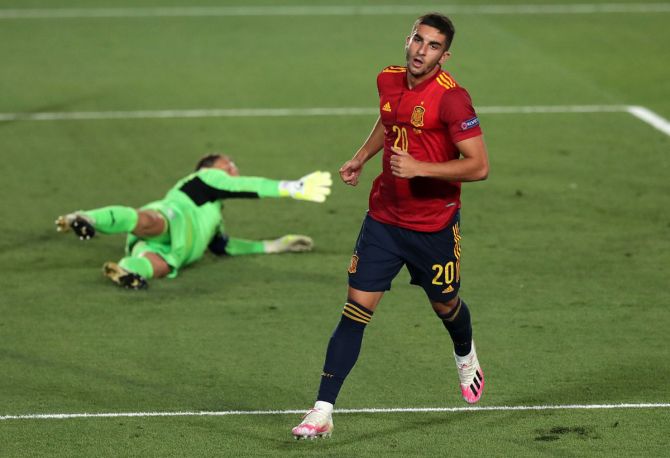 IMAGE: Spain's Ferran Torres, 20, struck on the volley in the 84th minute also to get his first goal for his country. Photograph: Gonzalo Arroyo Moreno/Getty Images

Substitute Ferran Torres, 20, struck on the volley in the 84th minute also to get his first goal for his country and round off a superb evening for a new generation of players as defenders Eric Garcia and Sergio Reguilon made their debuts.

"I congratulated Ansu, he's a very young player who gives us that freshness and desire which we need. It's great to have a new injection of youth and we're very happy to have players like him," said Ramos of his teenaged team mate.

"But it's not just him, it's all the players that proved themselves today, this is their moment and we hope they reach the top level.

"We absolutely deserved this result, we kept the ball well, we were solid in defence and were aggressive, pressing them all over the pitch and winning all the battles on the pitch."

The victory took Spain top of League A Group 4 with four points from two games. 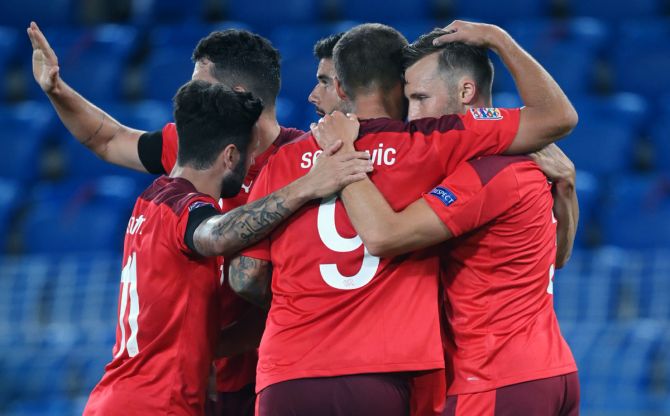 Germany were still waiting for their first-ever Nations League win after they gave a tired performance and were held to a 1-1 draw by Switzerland on Sunday.

Ilkay Gundogan gave Joachim Loew's side the perfect start with a clinical goal in the 14th minute but Silvan Widmer earned their smaller neighbours a deserved draw just before the hour.

In the end, Germany may have been grateful for the result in the League A Group 4 game as the much livelier hosts, unbeaten in their last 17 competitive matches at home, created the better chances.

Germany, who also let the lead slip in a 1-1 draw with Spain on Thursday, failed to win any of their four games in the inaugural Nations League two years ago and have drawn their opening two games this time around.

Switzerland have one point after losing their opener to Ukraine.

Germany coach Joachim Loew was left frustrated by his team's failure to capitalise on their early lead.

"We didn't take our chances for a second goal and allowed Switzerland to take control in the second half -- in the end I thought a draw was the right result," he said.

"When you lead 1-0 in two games and don't win either, it's annoying. It's a problem that we are not finishing off games... I doubt that Switzerland would have come back from 2-0 behind." 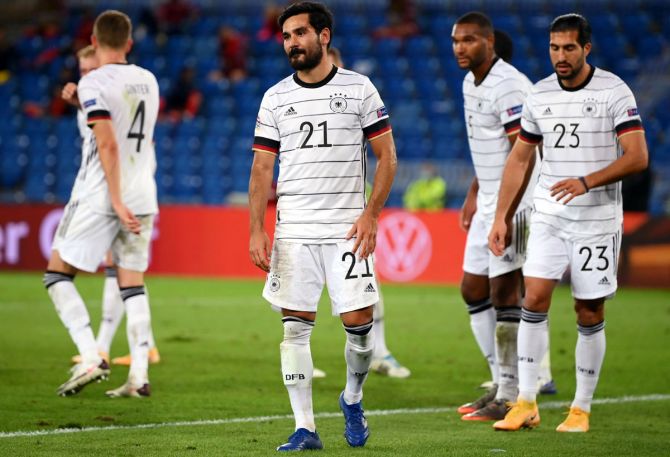 IMAGE: Germany failed to win any of their four games in the inaugural Nations League two years ago and have drawn their opening two games this time around. Photograph: Matthias Hangst/Getty Images

Loew stuck with his three-man defence and his side made an early breakthrough.

Matthias Ginter, despite being surrounded by five defenders, laid the ball back to Gundogan who rolled a shot between Yann Sommer and his near post from 20 metres.

Julian Draxler should have added a second shortly afterwards but shot straight at Sommer.

Switzerland were let down by their old failing in front of goal with Haris Seferovic the biggest culprit, mis-kicking from six metres after Djibril Sow's pass found him free.

The Benfica striker also hit the post just before halftime.

Breel Embolo's runs from midfield constantly troubled Germany and he set up the equaliser in 58th minute.

The visitors lost possession in midfield, Embolo burst into the area and laid the ball off to Widmer who scored on his return to the side after a three-year absence.

Granit Xhaka tested Leno with a long-range shot and was just wide with a free kick as Switzerland threatened a win.