PIX: Bagan ride on luck and pluck to beat EB in Kolkata derby

Mohun Bagan, who will join Indian Super League from next season as a merged team with ATK, beat arch rivals East Bengal 2-1 in a emotion-packed penultimate Kolkata I-League derby at the Salt Lake Stadium, in Kolkata, on Sunday.

East Bengal, who played under pressure in the first-half, looked a transformed unit after the break but Mohun Bagan struck through Baba Diawara (65th) against the run of play with the man-of-the-match Beitia sending in a clinical corner kick.

The Senegalese rose to the occasion and nodded it home to seal three points for Mohun Bagan, consolidating their position atop the table, in front of a massive turnout with 63,756 fans watching the match.

They now have 17 points from eight matches, six clear of second placed Punjab FC in an unbeaten six matches run. East Bengal suffered their third defeat in a row to be on eight points from seven matches.

A lacklustre East Bengal reduced the margin through Marcos Jimenez de La Espada (72nd) as there were a slew of attacks from the red-and-gold camp but none of them resulted in a goal.

It was substitute Edmund Lalrindika who showed his class with a delightful through ball to Espada as he shot low to the goalkeeper's right to reduce Mohun Bagan's lead.

But minutes later, there was another jolt for East Bengal as Edmund, who came in as a substitute, limped off the ground after suffering an injury. 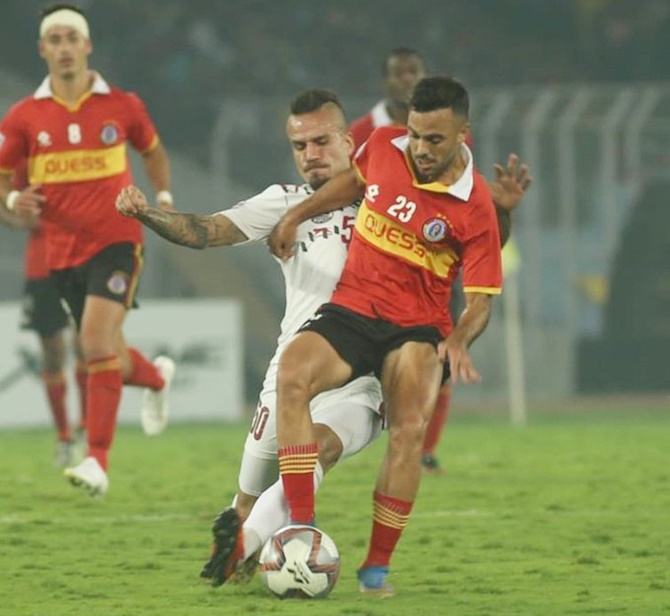 IMAGE: With Mohun Bagan announcing their merger with two-time ISL champions ATK, this was the penultimate Kolkata derby in the I-League era. Photograph: I-League/Twitter

East Bengal also had their best chance in the 80th minute when Juan Mera's 30-yard shot bounced off the crosspiece.

Pressing hard, East Bengal had several chances coming in their way in the dying moments but none of them resulted in a goal.

East Bengal also appealed for a penalty in the 60th minute when Marcos, who himself seemed to have handled the ball, was brought down inside the Mohun Bagan box by Sankar Roy but referee Ajitkumar Meitei had other ideas.

With Mohun Bagan announcing their merger with two-time ISL champions ATK, this was the penultimate Kolkata derby in the I-League era.

And Mohun Bagan made it special, winning their first derby since January 21, 2018 -- a 2-0 win in I-League. Since then, Mohun Bagan had failed to win from four matches, including two in I-League.

Crowds poured in hours before the start, holding placards and chanting the team slogans, making it a festive atmosphere at the iconic venue which will host the final I-League Kolkata derby on March 15.

Mohun Bagan coach Kibu Vicuna was clearly unhappy even after the win and said they should have played better in the second-half.

"Derbies are very special and they are difficult matches. We played well in the first-half but I'm not happy about the second-half. If we want to remain in top and win the competition, we have to play well in both halves," Vicuna said.

Mohun Bagan may have consolidated their position atop the table but Vicuna does not want to count much.

"We have just played 40 per cent -- eight of the 20 matches. We have to improve a lot of things if we have to win the competition. Now we have to shift focus on our (away) match against NEROCA (January 23)," he said.

Vicuna, however, hailed the 20-year-old loanee from Kerala Blasters Naorem who assisted brilliantly for the first goal.

"I'm very happy for him, he is a very good talent for Indian football. He has the European style, understands good spaces and which position he needs to be in to play the ball forward.

"With him, he's not a strong guy. He has to avoid contact. But most importantly, he's handling pressure very well and playing well in important games," he said.

East Bengal coach Alejandro Menendez said he's happy for the way they fought in the match.

"In the second half we should proved how we can put pressure on the opponents and create a lot of chances," Menendez said.

"We played very good football, hit the crossbar and maybe a penalty was denied but there were many positive things. This team is doing very good."