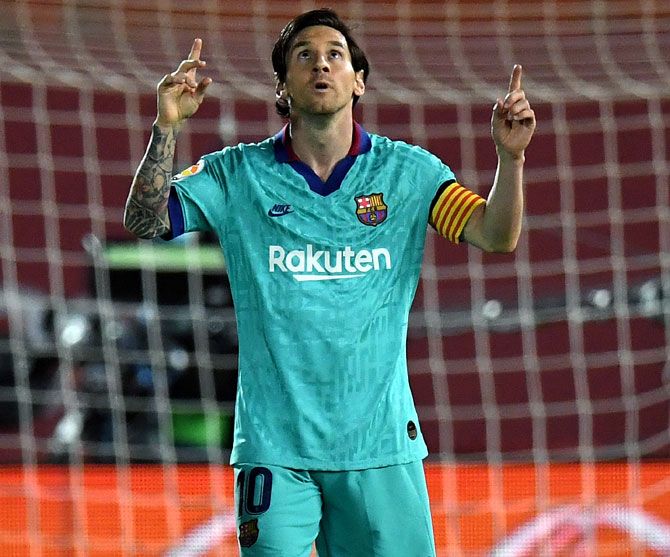 Lionel Messi scored and grabbed two assists as La Liga leaders Barcelona eased to a 4-0 win away to struggling Real Mallorca on Saturday, making the perfect return to action after Spanish football's three-month hiatus due to the COVID-19 pandemic.

The champions got off to a flying start when Chilean midfielder Arturo Vidal scored with a diving header in the second minute, while Danish international Martin Braithwaite scored his first goal for Barca later in the first half.

Jordi Alba then added a third goal for Barca in the 79th minute after latching on to a through ball from Messi, who had also set up Braithwaite's goal with a header.

The Argentine then completed the scoring with a deflected strike in stoppage time, netting 20 league goals for the 12th season in a row. 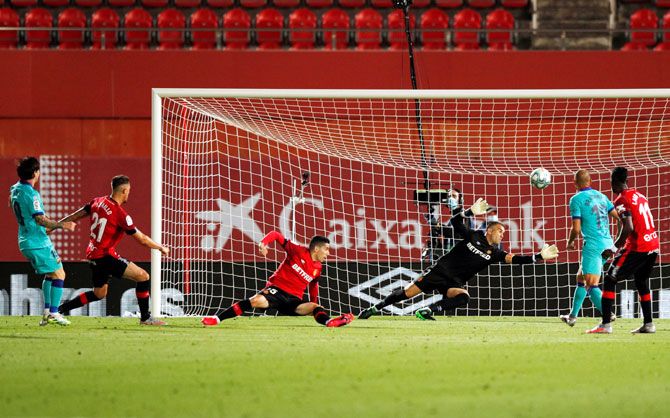 IMAGE: Lionel Messi scored the goal with a deflected strike in stoppage time, netting 20 league goals for the 12th season in a row. Photograph: Albert Gea/Reuters

The win takes Barca on to 61 points after 28 games, five clear of nearest challengers Real Madrid, who host Eibar on Sunday in their first game back.

"We controlled the game and it was a great performance after not competing for three months," goalscorer Alba said.

"We now have 10 must-win games to go and we are really looking forward to them." 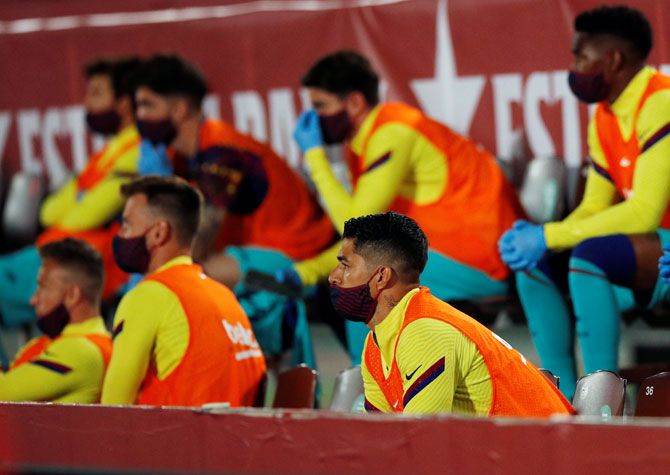 The game was played behind closed doors to prevent further spread of the novel coronavirus, but a fan wearing an Argentina shirt somehow made it on to the pitch, only to be swiftly taken away by security guards.

Luis Suarez made his first appearance since injuring his knee six months ago, coming off the bench in the second half, while his fellow Uruguayan Ronald Araujo hit the post shortly before Alba struck.

Mallorca occupy the final relegation spot in La Liga but despite the heavy loss they gave a decent account of themselves, with 19-year-old Japanese playmaker Takefusa Kubo pulling the strings.

Kubo tested Barca keeper Marc-Andre ter Stegen in the first half while Ante Budimir, Lago Junior and Abdon Prats all flashed shots just wide of the target after the interval.